They don't? I thought the whole industry followed the same protocol. Wtf?

No. Gay performers wear condoms meaning they never have to get tested unless a specific company makes them.

😩 for real? I think I just facepalmed so hard my hand went through my head. 😒 that's so fucking unsafe. Not even just for the industry. That's unsafe for anyone. 😖

Scary isn't it? It's not being homophobic trust me, it's just unsafe to fuck someone untested even with a condom and then go back and fuck people in a tested pool because it can spread stds in the straight performer pool

Despite the mantra that women are allowed to do whatever they want with their bodies and choose who they have sex with, people piled on against Ames and accused her of hating gays. 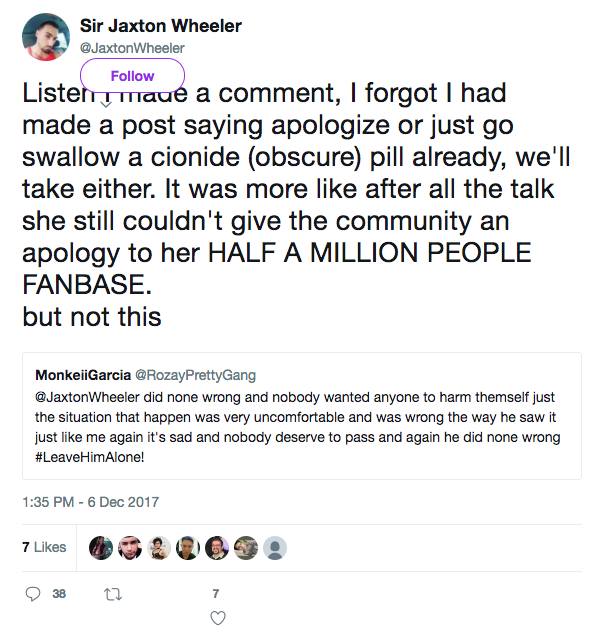 bullshit. Before your shoot w said performer, for a bg shoot, he would have to get tested, by the same testing companies we all use.When the results are clear, you are clear to fuck him. AND you can ask to use a condom if you want. So there is literally no reason to discriminate

Exxxactly @JaxtonWheeler It's extremely unfair to be black listed because a ridiculous naive stigmatism created by unethical homophobes. I have been doing films for over 8 years and have never contracted anything because my health and safety comes first. So yes, offense taken.

Thanks @JaxtonWheeler 4 calling peeps out on their misconception about us "dirty, disgusting" gay/BI performers & our ways of shady business ethics. So we're clear everyone, us performers who like to fuck girls, partake in the same industry testing standards. #NotRocketScience

.@nickcapra You're a pile of shit. Are you happy she's dead? You got what you wanted, didn't you? YOU AND PEOPLE LIKE YOU ARE RESPONSIBLE.#KillYourselfToo ɹǝʞɔnɟɹǝɥʇoɯ pic.twitter.com/YCTQVTBet0

Before Ames died, she tweeted a few messages for detractors:

Hmm. Well, I did all three, and twitter took a dump on me🤷🏽‍♀️

I don’t have anything to apologize for! Apologizing for taking extra steps to ensue that my body stays safe? Fuck you guys attacking me when none of my intentions were malicious. I fucking love the gay community! What the fuck ever! I CHOOSE who I have inside my body. No hate. https://t.co/7dSbq27K2F