Pope to UN: There is a ‘Right of the Environment’ 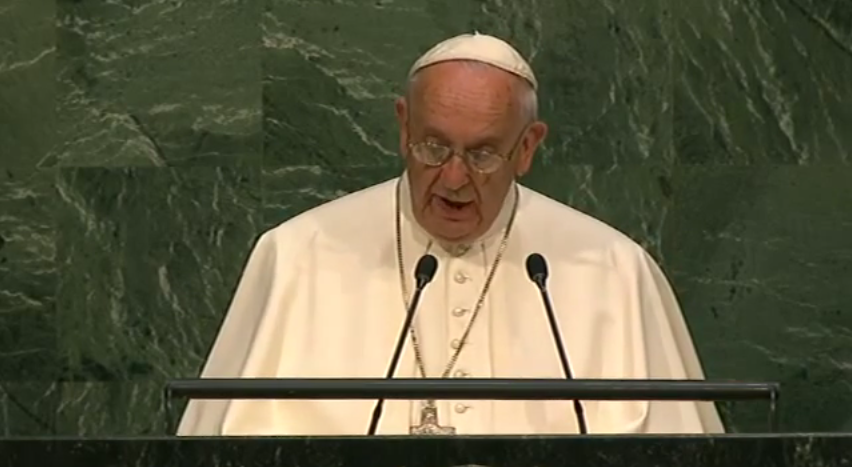 While addressing the United Nations general assembly Friday morning, Pope Francis declared there is a “true right of the environment” that, along with the rights of the excluded, needs to be “forcefully affirmed.”

Pope Francis began his discussion of the environment by speaking about “vulnerable” sectors, which are “victims of power badly exercised.”

Two examples of victims of badly exercised power, according to the pope, are “the natural environment and the vast ranks of the excluded.”

“These sectors are closely interconnected and made increasingly fragile by dominant political and economic relationships,” Francis stated. “That is why their rights must be forcefully affirmed, by working to protect the environment and by putting an end to exclusion.”

Pope Francis then claimed there is a “right of the environment”:

“First, it must be stated that a true ‘right of the environment’ does exist, for two reasons: First, because we human beings are part of the environment. We live in communion with it, since the environment itself entails ethical limits which human activity must acknowledge and respect. Man, for all his remarkable gifts, which are signs of a uniqueness which transcends the spheres of physics and biology, is at the same time a part of these spheres. He possesses a body shaped by physical, chemical and biological elements, and can only survive and develop if the ecological environment is favorable.”

Pope Francis stated humans are “not authorized to abuse” the planet, “much less to destroy it”:

“Second, because every creature, particularly a living creature, has an intrinsic value, in its existence, its life, its beauty and its interdependence with other creatures. We Christians, together with the other monotheistic religions, believe that the universe is the fruit of a loving decision by the Creator, who permits man respectfully to use creation for the good of his fellow men and for the glory of the Creator; he is not authorized to abuse it, much less to destroy it. In all religions, the environment is a fundamental good.”

As well, the pope decried a “a selfish and boundless thirst for power and material prosperity” and denounced the “culture of waste”:

Pope Francis also vocalized his support for the United Nations and its agenda to tackle sustainable development and climate change. He said, “The adoption of the 2030 Agenda for Sustainable Development at the World Summit, which opens today, is an important sign of hope. I am similarly confident that the Paris Conference on Climatic Change will secure fundamental and effective agreements.”