Pope: 'We Have Defaulted on a Promissory Note' to the Planet 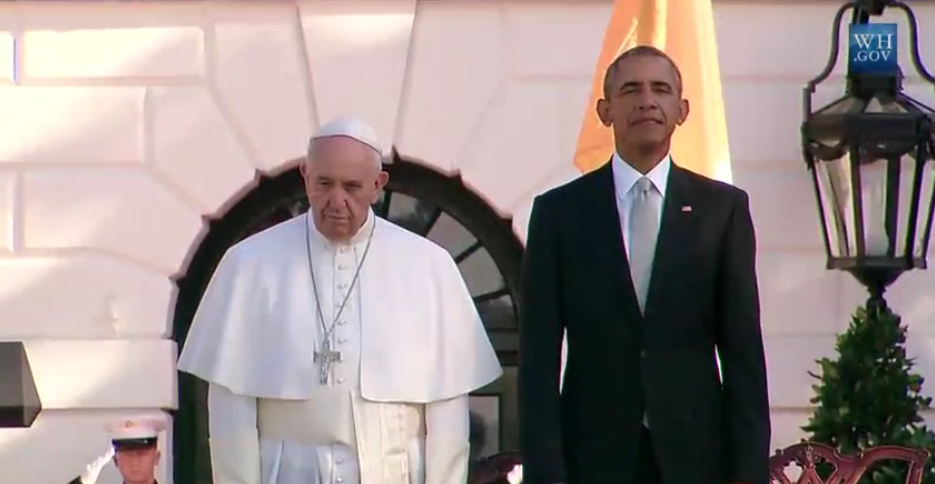 While welcoming Pope Francis to the White House this morning, President Obama thanked Pope Francis for reminding the public of a “sacred obligation to protect our planet” and Pope Francis applauded Obama for his efforts to reduce air pollution.

During his speech introducing Pope Francis to the White House, Obama applauded Pope Francis for speaking about a “sacred obligation to protect the planet”:

“And, Holy Father, you remind us that we have a sacred obligation to protect our planet: God’s magnificent gift to us. We support your call to all world leaders to support the communities most vulnerable to the changing climate and to come together to preserve our precious world for future generations.”

Likewise, Pope Francis vocalized his approval of a proposal by the Obama administration to reduce air pollution:

“Mr. President, I find it encouraging that you are proposing an initiative for reducing air pollution. Accepting the urgency, it seems clear to me also that climate change is a problem we can no longer be left to a future generation. When it comes to the care of our ‘common home,' we are living at a critical moment of history. We still have time to make the change needed to bring about a sustainable and integral development for we know that things can change. Such change demands on our part a serious and responsible recognition, not only of the kind of the world we may be leaving for our children, but also to the millions of people living under a system which has overlooked them.”

Pope Francis also spoke about how “our common home” “cries out to heaven”:

“'Our common home' has been part of this group of the excluded which cries out to heaven and which today powerfully strikes our homes, our cities and our societies. To use a telling phrase of the Reverend Martin Luther King, we can say that we have defaulted on a promissory note and now is the time to honor it.”