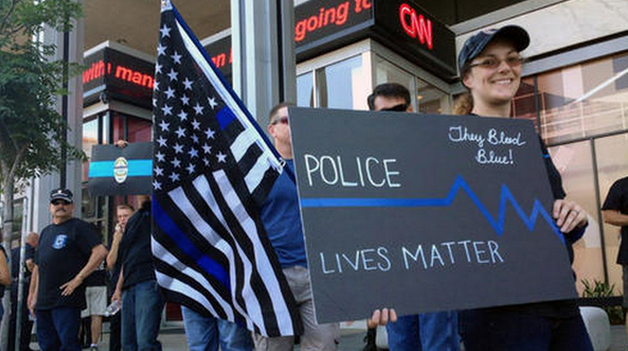 The senators argue that, in doing so, the government can send the message that "police lives also matter."

According to a press release obtained by MRCTV on Tuesday:

“When a jury in a federal case considers whether to impose the death penalty, the jury must consider certain “mitigating” and “aggravating” factors. Current law states that if the murder victim was a federal law enforcement officer or prosecutor, this fact shall weigh as an aggravating factor in favor of the death penalty. The Thin Blue Line Act provides the same level of justice to local law enforcement officers, prosecutors, and firefighters. It also enhances the penalty when a defendant targets a law enforcement officer, prosecutor, or firefighter solely because that individual chose to protect and serve. Rep. David Jolly (R-Fla.) has introduced similar legislation in the House.”

Several state and national organizations have endorsed the “Thin Blue Line Act,” including the Pennsylvania Chiefs of Police Association, the National Sheriff’s Association, and the Fraternal Order of Police.

Sen. Toomey argues that imposing harsher penalties is an important and meaningful way for Congress to help prevent attacks on law enforcement officers.

“It is important we send the message that police lives also matter, and that if you target a police officer with violence, you will receive a harsh penalty,” he said.

"Congress has long recognized that additional tools are needed to prevent such attacks on law enforcement officers," said Toomey.

“The alarming spike in violence directed against the men and women entrusted with ensuring the safety and order of our society must be stopped,” said Sen. Sessions.

“The 'Thin Blue Line Act' will help protect our officers by bringing harsher penalties to criminals committing these vile acts and by extending the protections afforded to federal officers to our local police and first responders.”

“This legislation honors the message sent by law-abiding Americans that we cannot stand idly by as attacks are waged upon those who serve and protect our communities.”