Planned Parenthood of Maryland has exposed its own hypocrisy, on the eve of the annual March for Life in Washington, no less.

Because its members and fawning politicians cherish human life so much, the tax-subsidized organization Tweeted this photo and link… Really. 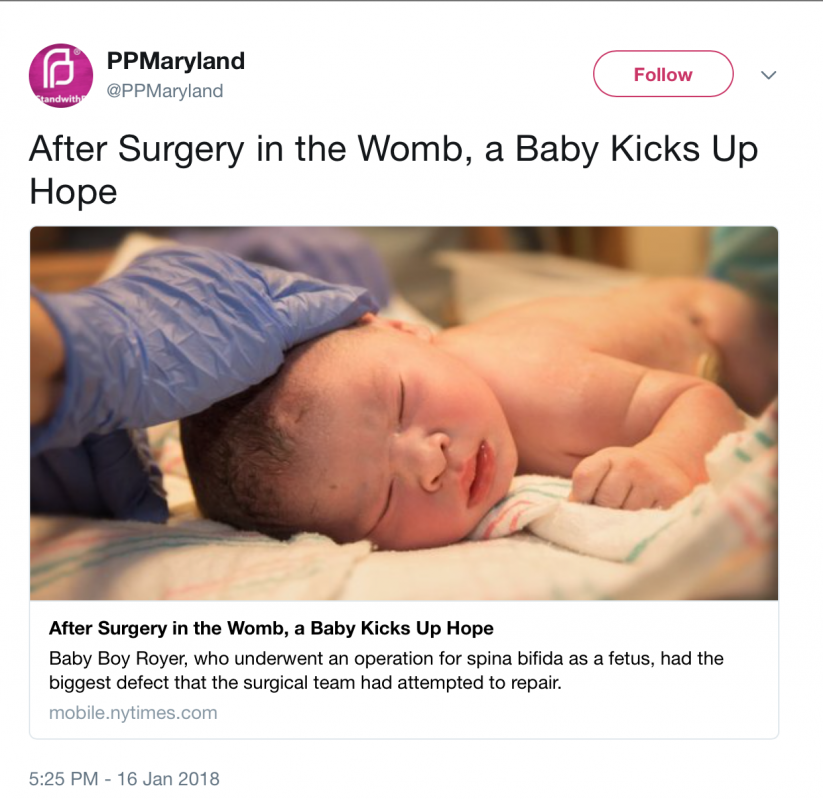 The link takes willing readers to the New York Times, and a heart-warming story by Denise Grady about how in-the-womb surgery helped cure a baby of spina bifida, a crippling non-closure of the spinal column that, until recently, had to be approached after birth.

And not only is this story great to see from a basic human standpoint, it’s stunning in how Planned Parenthood of Maryland didn’t seem to vet it. Certainly, the opening -- which offers a realistic portrayal of a baby in the womb as a distinct human being – doesn’t help bolster the PP argument that babies before birth are less than human:

“For a small person who had surgery before he was even born, and who’d just spent an hour and a half squeezing through a tight space that clamped down on his head every few minutes, Baby Boy Royer was showing a feisty spirit… He arrived pink and screaming on Friday at 5:35 a.m., two days before his official due date, weighing 8 pounds 8 ounces, and almost 20 inches long.”

And the article continues, offering more connections between the “personality” of the born and the personhood of the unborn:

“On Sept. 27, as a six-month-old fetus, he underwent experimental surgery while still in his mother’s womb to treat a severe form of spina bifida, in which the tissue that should enclose and protect the spinal column does not form properly.”

Some might accuse this writer of unfairly attacking PP, which, after all, only wants the “best” for children – hence its history of being the top organization in US history to promote the elimination of babies before they’re born… You know, to make sure they have that “best” chance of a good life on Earth.

Created by legendary racist, “progressive”, eugenicist, and cause-celeb to close friend, the utopian eugenicist socialist HG Wells) Margaret Sanger, who opened her first abortion clinic in 1916, the organization which soon took on the name Planned Parenthood International has at its core the fundamental denial of the right of each human being to live free from aggressive attacks by others.

Rather, Sanger and her ilk took a consequentialist approach to life, believing that the ends justify the means, and their ends were a “better”, “cleaner” world filled with healthy people of “elite” intelligence.

To quote Sanger, on minorities, in her ever-so-sweet screed “Pivot of Civilization”:

"There is but one practical and feasible program in handling the great problem of the feeble-minded. That is, as the best authorities are agreed, to prevent the birth of those who would transmit imbecility to their descendants. Feeble-mindedness as investigations and statistics from every country indicate, is invariably associated with an abnormally high rate of fertility. Modern conditions of civilization, as we are continually being reminded, furnish the most favorable breeding-ground for the mental defective, the moron, the imbecile.”

And she famously said this to a pastor who had been recruited to get poor black Americans to acquiesce to taking money in exchange sterilization:

“In this way, the moron and the diseased would have no posterity to inherit their condition.”

She once said that the purpose of birth “control” was to “Create a race of thoroughbreds.”

I could go on, but you get the drift.

So, since its inception, Planned Parenthood has not been about “caring” for each child and wanting him or her to have a good life. It’s been about a consequentialist, socialist, utopian agenda that sees each individual as insignificant and utterly, contemptuously dispensable in favor of “the greater good”: a eugenics-based worldview that Adolf Hitler praised at the time.

The very idea that a child in the womb who was not developing in a typical fashion should have resources spent on helping it is completely and utterly contrary to the entire superstructure of the Planned Parenthood philosophy.

So their Tweet might not stay up forever. Like most socialist utopians, the re-writing of history is something they like. They have tried to whitewash the evils of their founder, and they certainly won’t like people making the connection between a living baby and the fetus he was a few weeks before. 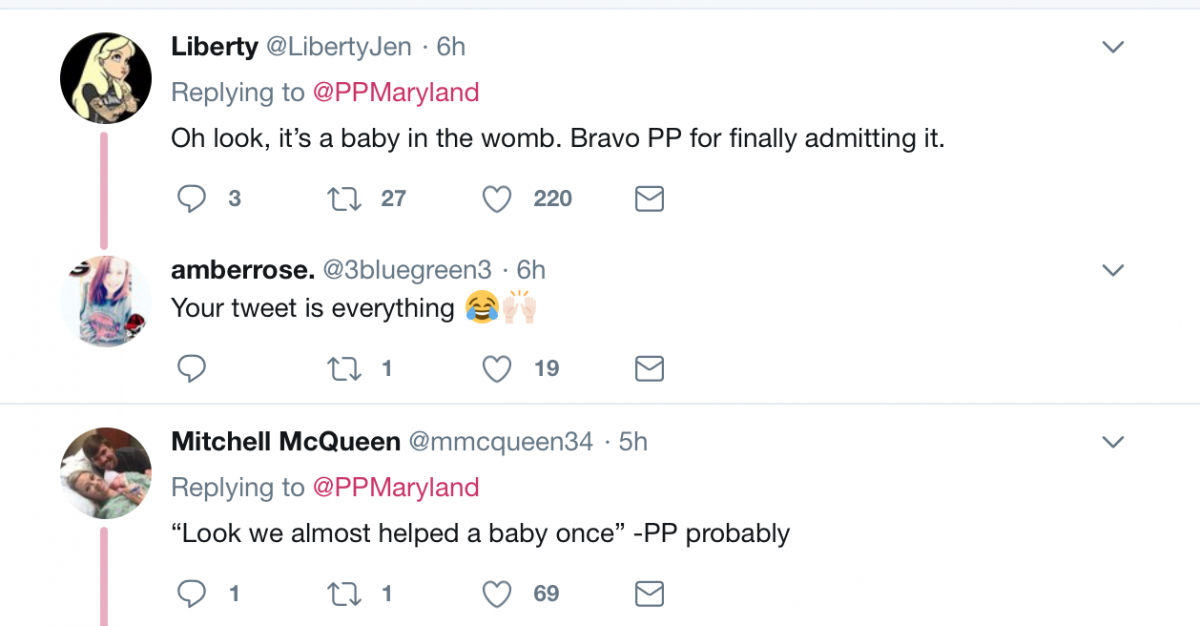