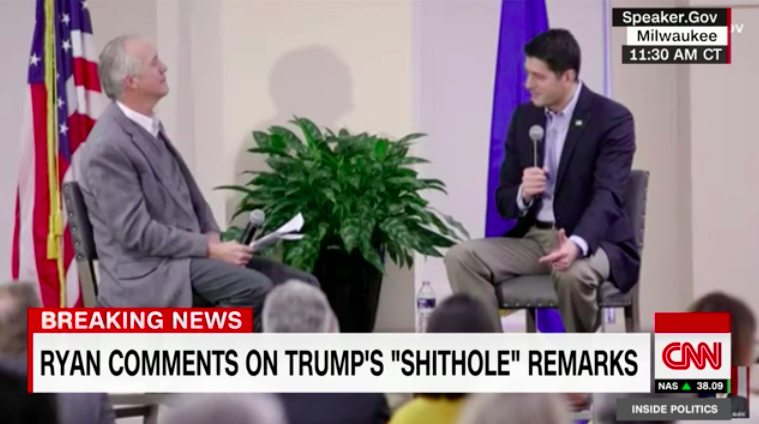 “So first thing that came to my mind was, very unfortunate, unhelpful,” he said at a WisPolitics Luncheon in Milwaukee, Wisc.

Ryan added that immigration is something that should be celebrated and that the U.S. has “incredible citizens” from Haiti and Africa.

He said that talks on immigration reform will now be made separate from spending bill negotiations, reports Reuters.

Trump currently faces a firestorm of criticism, with several media, politicians and world leaders labeling him as "hateful" and "racist" for allegedly referring to Haiti and African nations as “shithole countries” during a meeting on a bipartisan Deferred Action for Childhood Arrivals (DACA) program deal Thursday night.

The President has denied the remarks, though he admitted on Twitter that the language he used during the meeting was “tough.”

Sen. Lindsey Graham (R-S.C.), was one of several lawmakers who were in the room when Trump made the reported remarks, issued a statement on Friday saying that he has already said his "piece directly to him."

My statement on #DACA. pic.twitter.com/kpJ2NHEoGL

Other lawmakers such as Sen. Dick Durbin (D-Ill.) have come out to confirm what the President had reportedly said and condemned his comments as "hate-filled, vile and racist."

The comments that Trump made during our immigration meeting were hate-filled, vile, and racist. pic.twitter.com/u7gJuasAD2