A New York health teacher has been suspended after inviting an LGBT advocate to teach middle-schoolers about sexual vocabulary – including more than 200 graphic terms about sexual preferences and lifestyles.

In a Facebook Live video that’s been viewed nearly a million times and garnered thousands of comments, Sirell Fiel, an Albany resident, explained his 11-year-old son had come home from school with a four-page packet from his seventh-grade health class at Cambridge Central School that included dozens of explicit terms for gender, sexuality, identity and preference, along with an explainer on “heterosexual privilege.”

The handout also explained terms like “catcher,” a slang word for a submissive homosexual partner, and "tucking," the meaning of which should be obvious to anyone who's ever seen Silence of the Lambs. The sheet also gave explicit details on gender transition surgery, all the way down to herbs used for hormone therapy.

“I understand we live in a [diverse] world, everyone's got their thing and not everyone's going to be the same,” Fiel said in the video. “But, as we come with our own Christian values, we live by our own expectations and when it comes to teaching our kids certain things, that should be left up to us, not the school districts. Not health class in seventh grade, no.”

“I have no problem with the school talking about diversity,” Fiel later told the Glen Falls Post Star, adding that his main gripe was the level of detail regarding sexual lifestyle choices being given to 11-year-old kids by a pro-LGBT rights activist without their parents’ knowledge. 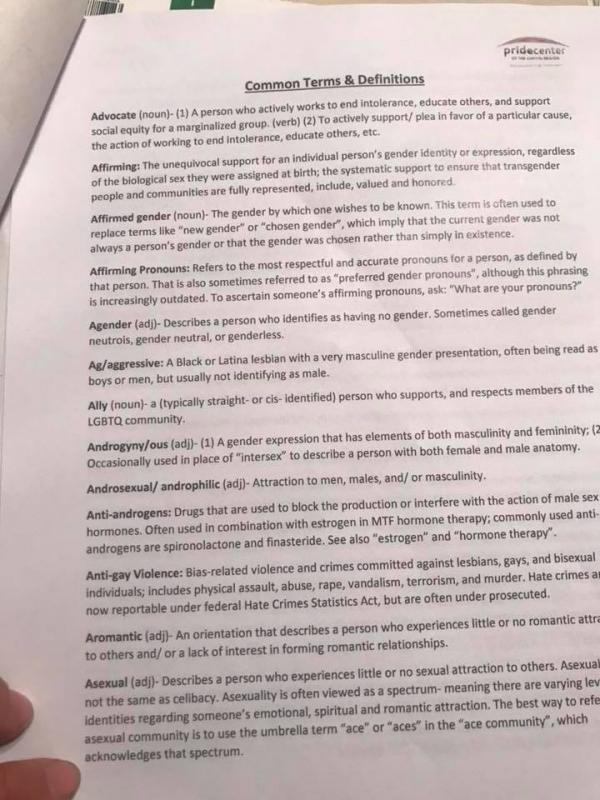 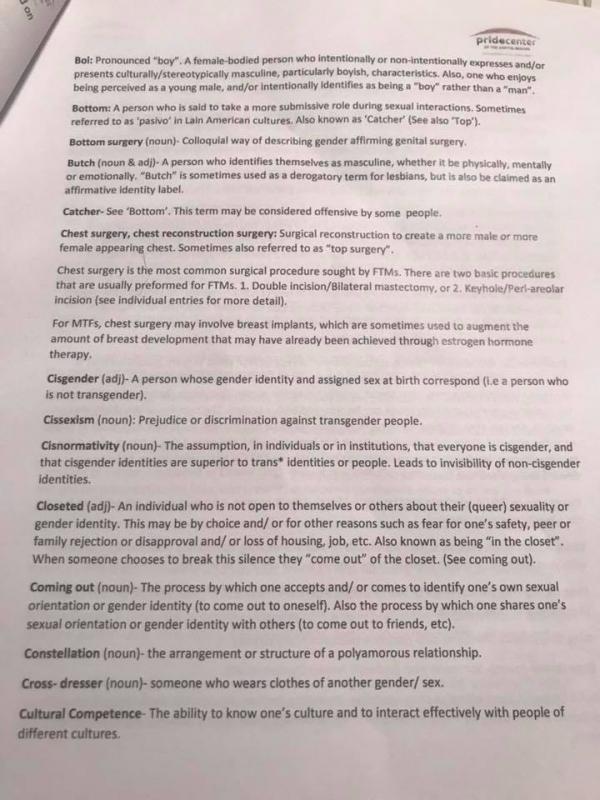 Pages from the handout given to 7th graders at Cambridge Central School in Albany, N.Y. (Facebook/Sirell Fiel)

The school confirmed the guest speaker who handed out the information had been arranged by the Pride Center of the Capital Region, an LGBTQ education and advocacy group.

School Superintendent Vincent Canini said the teacher had invited the guest speaker with permission, but that the packet handouts – which had been created and distributed by the LGBT advocate, not a school employee – hadn’t been submitted for review before being given to the students.

The guest speaker was arranged through the Pride Center of the Capital Region, an LGBTQ education and advocacy group.

While the organization's president and CEO, Martha Harvey, declined to identify the speaker, Harvey told the Glen Falls Post Star that there had not been any prior complaints about the information packet, which has been used for more than a decade at schools.

Frankly, I wasn’t even aware that there were 200 distinct terms about sexual preference and identity, much less that anyone would think them appropriate to hand out to prepubescent 11-year-olds.

Then again, there are apparently now 927 genders to choose from, so I guess teaching kids about sexual submission is about as logical.