It wouldn’t be a day ending in “y” if a modern feminist wasn’t offended by something ridiculous.

Thursday marked the observance of the Socialist-invented International Women’s Day. Yes, the day that honors women every year across the world was constructed by people of the same ideology that has seen millions murdered as a result of its implementation.

On Thursday, Oxford University professor Sophie Smith took to Twitter to share a picture of a female janitor cleaning up chalk-written words on the steps of Clarendon.

The words the janitor was scrubbing off? “Happy International Women’s Day.”

Of course, Smith got all triggered because a woman was doing the cleaning on that most momentous of days. 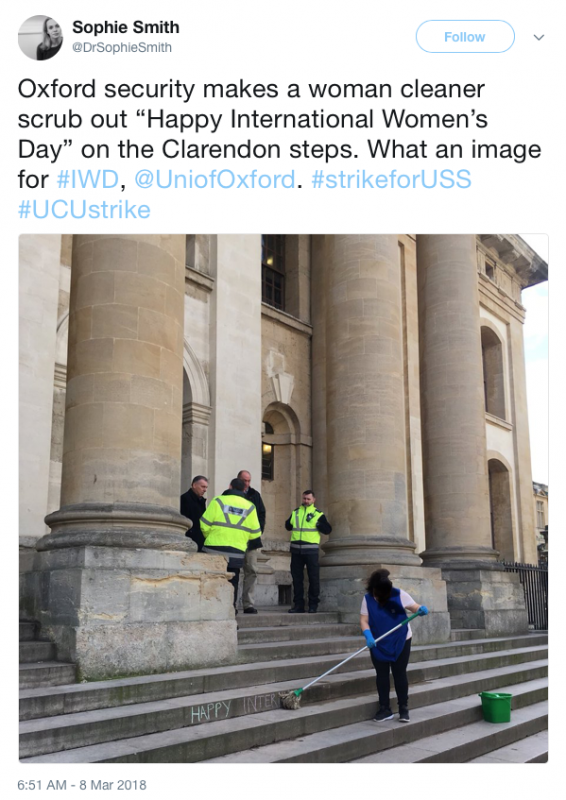 While the picture might not have presented the best of optics for Oxford, the whole thing was coincidental, at best. Oh, and Smith was seemingly the only person who saw this and found it offensive. She took the picture, so isn’t Smith the one presenting a woman having a job as negative?

You don’t get the day off for International Women’s Day, so the woman in the picture was just doing her job. Smith used this woman to push a modern feminist narrative that is false.

Since most college administrators are quivering piles of kowtowing goo, Oxford University issued an apology a little more than an hour after Smith’s tweet went public.

Here is the apology from Oxford:

But, apologies simply aren’t good enough for modern feminists anymore. Classical feminist just wanted to be treated equally, but when you give a modern feminist an inch, they’ll most likely take an entire football field.

This was Smith’s response to the very quick apology from Oxford: 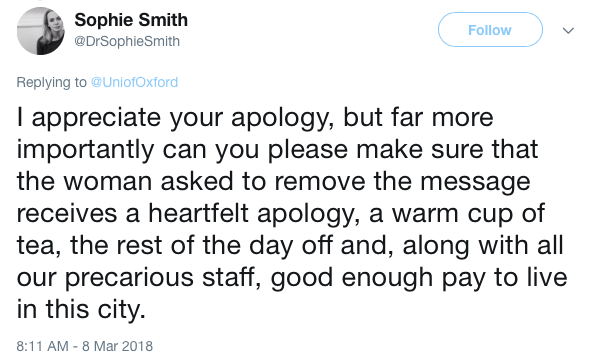 Why not give this woman the key to the city while we’re at it? Heck, make her part of the Royal family. If you continue to ask that people receive things that they didn’t earn, you end up with a society full of Sophie Smiths.

The woman was doing her job. Quit the virtue signaling.