O’Reilly Slams Left's Response to Castro's Death: ‘A Vicious Dictator is Now Being Praised All Over the World’ 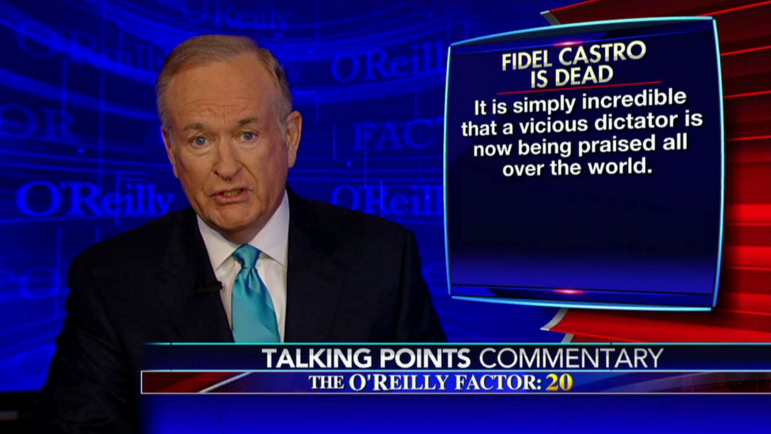 Bill O’Reilly on "The Factor" Monday night slammed the left for ignoring Castro's record of human rights abuses and political oppression in its coverage of his death.

“It’s simply incredible that a vicious dictator is now being praised all over the world,” said O’Reilly.

He added that the left "loves" Castro "because he gave his people free medical care."

Canadian Prime Minister Justin Trudeau gave validity to O'Reilly's argument by praising Castro on Saturday as “a larger than life leader” who "made significant improvements to the education and healthcare" of Cuba.

His statement raised many eyebrows, having expressed "deep sorrow" at the news of Castro's death.

Former Green Party candidate Jill Stein similarly praised Castro on Saturday as “a symbol of the struggle for justice in the shadow of empire."

Fidel Castro was a symbol of the struggle for justice in the shadow of empire. Presente!

“History will record and judge the enormous impact of this singular figure on the people and world around him,” writes Obama. “Today, we offer condolences to Fidel Castro's family, and our thoughts and prayers are with the Cuban people.”

Despite the left’s soft response, a recent Rasmussen poll shows that most Americans (81 percent) still view Castro in a negative light.

As his health declined, Castro formally stepped down as president in 2008, ceding his power to his younger brother Raúl.