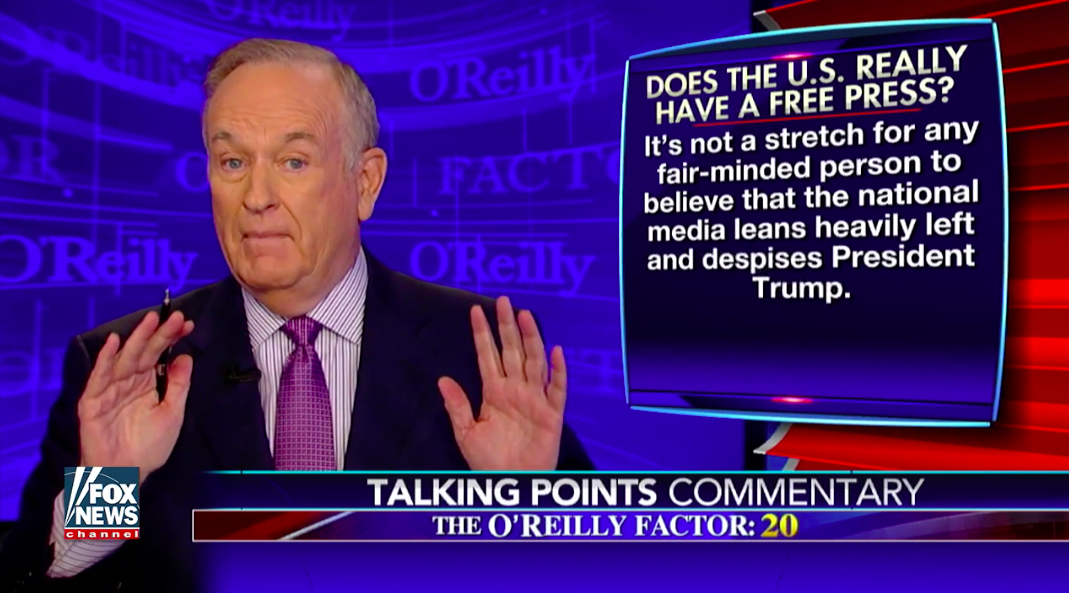 Bill O’Reilly on “The Factor” Monday night slammed the news media for leaning heavily to the left in its coverage of President Trump and his administration.

He pointed out how many Americans feel that the news media has aligned itself with the Democratic Party, adding how it doesn't help that the overwhelming number of newscasters on air happen to be liberal.

“It is not a stretch for any fair-minded person to believe that the national media leans heavily left and despises President Trump, not willing to give him a chance or any benefit of the doubt," said O’Reilly. “Surely, that’s what’s going on.”

He conceded that the “adversarial nature of the press” is vital to a successful democracy, “but when the press aligns itself with a political movement – in this case, liberalism – then it is no longer objective or free.”

"Summing up, if the American press wants to regain respect, it needs to ditch its outwardly liberal bent," O'Reilly argued. "I know all these people; I know all the anchors, most of the producers. I know who they are and how they think. In the national press, it is at least ten-to-one liberal over conservative."

President Trump has regularly criticized the media as “dishonest.”

After news of his former national security adviser’s resignation and the leaks of classified information from within his administration came to light, Trump intensified his rhetoric, going so far as to label the media as outright “fake.”

Don't believe the main stream (fake news) media.The White House is running VERY WELL. I inherited a MESS and am in the process of fixing it.

The poll’s findings echo those of Gallup’s most recent annual poll on the American public’s trust in media, which registered at an all-time low in 2016 with just 32 percent of respondents saying they have "a great deal or fair amount of trust in the media."