O'Reilly: 'A Complete Ban on Muslims Would Actually Hurt the War on Terror' 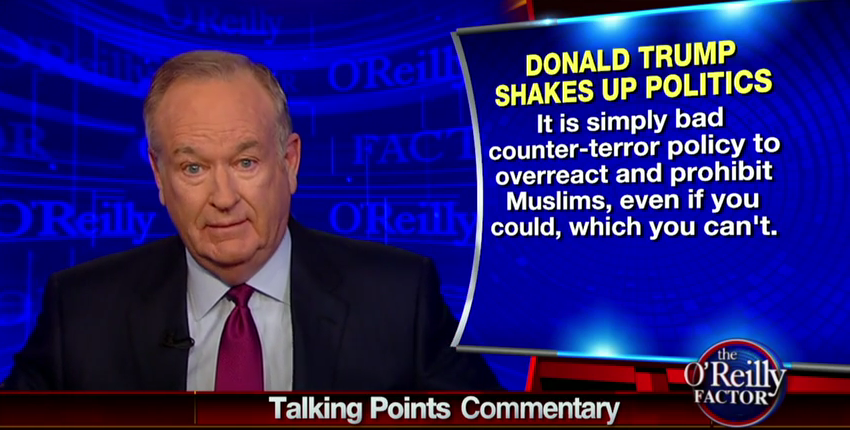 O’Reilly argued that such a ban -- which "will never happen" because it blatantly violates the Constitution on multiple fronts -- would actually hurt the war on terror rather than help it.

“The federal courts would never, never allow the government to deny anyone entry solely on the basis of religion,” said O’Reilly. “So the whole discussion is really moot. Goodnight everyone!”

“As with revoking the citizenship of so-called anchor babies, a ban on Muslims traveling the USA will never happen,” he went on. “However, the feds do have an obligation to deny visas to anyone who might cause harm to the country. Thus, people living in countries where jihad and terrorism are rife can and should be scrutinized, with the burden of proof on those who want to come here.”

“But a complete ban of Muslims would actually hurt the war on terror,” O’Reilly argued.

“The U.S. and other Western nations need moderate Muslims countries to fight the jihadists,” he explained. “The West can’t defeat the jihad without the help of Jordan, Egypt, to some extent Pakistan, Saudi Arabia, and the rest of the Gulf states. We need them to cooperate with us militarily and with intel.”

“It is simply bad anti-terror policy to overreact and prohibit Muslims, even if you could, which you can’t!” O’Reilly exclaimed.

For more, watch the video clip below.