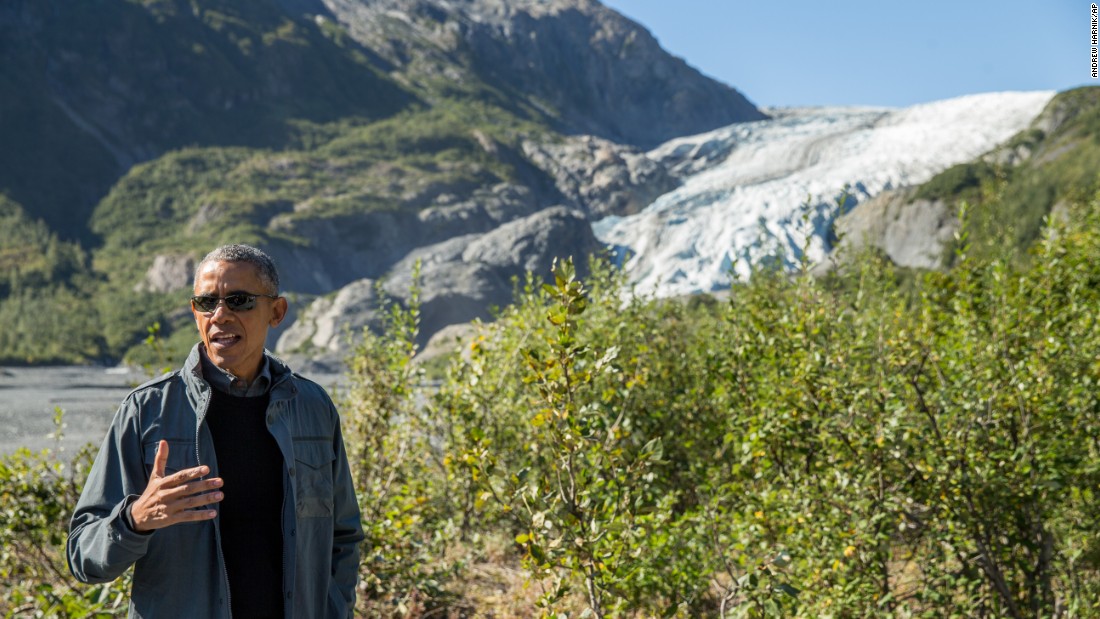 President Obama spent the first days of September 2015 in Alaska to promote the global re-distribution of income policy based on the man-made climate change hypotheses. When he visited the glaciers in Alaska, Obama claimed that global warming was melting the glaciers - but, that's not true. They've been melting since before the American Revolution. And, as far as the ice cap, the Arctic ice cap is growing - but President Obama doesn't says it isn't:

President Barack Obama walked down a winding wooded path, past a small brown post marked "1926" and a glacial stream trickling over gravel that eons of ice have scraped off mountain peaks.

He reached another post reading "1951", a marker for the edge of Alaska's Exit Glacier that year, and gazed up toward where the rock-rutted ice mass has since receded, a quarter mile away.

"This is as good a signpost of what we're dealing with on climate change as just about anything," Obama told reporters near the base of the glacier.

The truth is that reports of glaciers melting away have been in the newspapers for a very long time, like this clipping from Braidwood Dispatch and Mining Journal - in 1910:

The map below is from the  United States Geological Survey. It shows where the Glacier Bay ice is today vs. where it was at various points in history, going back to just before the American Revolution.  Unless Gen. Washington led the revolutionary army around in SUVs, there was no problem with greenhouse gasses back then.  In fact, if you look at the map, most of the melting took place before the 20th century.  Perhaps, Pres. Obama believes Abraham Lincoln freed the slaves and melted the glaciers?

The satellite monthly global mean surface temperature findings show no global warming for 18 years, 7 months (since January 1997). That was the last time Hillary Clinton was trolling around the White House. Note that there was warming before Jan. 97, and thanks to the El Nino, there may be warming in the near future (at least until the La Niña starts or the lack of sunspot activity throws us into a mini ice age as some scientists are predicting).


Meanwhile, those claims the warmists are making about the hottest temperatures on record are "sort of" true. The climate change alarmists are using land-based temperature readings, rather than satellite data.

Climate scientists actually preferred satellite data as being more accurate until it started disproving their global warming hypothesis. Even when examining the land readings, when warmist scientists say it is the warmest month in history, the margin is in hundredths of a degree.

Not meaning to upset the president or the other climate change alarmists, but to tell the truth, the ice caps are actually growing - not shrinking. A July 2015 article in the U.K. Telegraph called "How Arctic ice has made fools of all those poor warmists" reported:

In recent years there has been more polar ice in the world than at any time since satellite records began in 1979. In the very year they had forecast that the Arctic would be “ice free”, its thickness increased by a third. Polar bear numbers are rising, not falling. Temperatures in Greenland have shown no increase for decades.

When the Telegraph talks about increased polar ice since 1979, it is really talking about both poles combined, as the Antarctic ice cap has been growing more substantially over that period.

But the Arctic ice cap is going through a growth spurt, too. After showing a decline early in the 21st century, the Arctic ice is growing, as reported in Nature Geoscience:

However, we observe 33% and 25% more ice in autumn 2013 and 2014, respectively, relative to the 2010–2012 seasonal mean, which offset earlier losses. This increase was caused by the retention of thick sea ice northwest of Greenland during 2013 which, in turn, was associated with a 5% drop in the number of days on which melting occurred—conditions more typical of the late 1990s. In contrast, springtime Arctic sea ice volume has remained stable.

In other words, if the ice cap could talk, it would say, "Baby I'm Back!"   It seems as if the Ice Cap size ebbs and flows for natural reasons which have nothing to do with CO2 in the air.

As the carbon in the atmosphere has been growing in recent decades of the last century, we've seen the ice grow, recede, and grow again. The amount of CO2 in the atmosphere is at its highest level in almost 13,000 years. Approximately 12,750 years ago, before big cars, Al Gore, and coal plants, CO2 levels were higher than today. And during some past ice ages, levels were up to 20x today's levels. If the Earth could be covered with ice with CO2 levels 20x more than today, it is illogical to believe that today's levels have anything to do with growing and/or receding ice.

Obama also declared there's an increasing number of severe storms in Alaska - another mistruth. A study published in July 2012 in the journal of the American Meteorological Society concluded unequivocally there is no trend of stronger or more frequent storms, asserting:

We have identified considerable inter-annual variability in the frequency of global hurricane landfalls, but within the resolution of the available data, our evidence does not support the presence of significant long-period global or individual basin linear trends for minor, major, or total hurricanes within the period(s) covered by the available quality data.

The president went to Alaska to point out how global warming was changing the landscape. But, he did not tell the truth. Even in the cases where the landscape has changed, where the glaciers have melted, government agencies prove that those changes are centuries old and have nothing to do with climate change.

With all the data and resources at his disposal, the president should know better than to make claims like these - so, when he does, what conclusion should we draw, other than that he's lying?