A Texas judge ruled on Friday that the Affordable Care Act was unconstitutional.

The decision comes during "open enrollment" for the healthcare program.

The Affordable Care Act, also known as Obamacare, was struck down by a Texas judge on Friday, a move that could suddenly disrupt the health insurance status of millions of Americans. The decision comes amid a six-week open enrollment period for the program.

Texas, along with 19 states, had argued to U.S. District Judge Reed O’Connor that they had been hurt by a jump in the amount of people utilizing state-backed insurance. When Congress cut the tax penalty from the program in 2017, the states claimed, it essentially undercut the Supreme Court’s reasoning for finding former President Barack Obama’s signature legislation constitutional in 2012.

Judge O’Conner in a 55-page opinion wrote that “the remainder of the ACA is non-severable from the individual mandate."

"To find otherwise would be to introduce an entirely new regulatory scheme never intended by Congress or signed by the president,” he argued.

“California and other states ruled against by the judge will likely challenge the decision by appealing in the United States Court of Appeals for the Fifth Circuit,” writes Fox News.

Soon as the news broke Friday evening, President Trump took to Twitter to comment on the ruling, calling it, "Great news for America!" 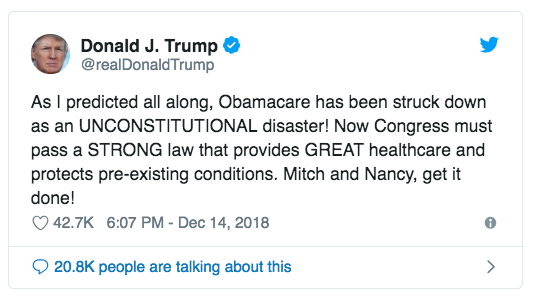 Whether the ruling will have any effect on those who already enrolled for coverage for 2019 is unclear.