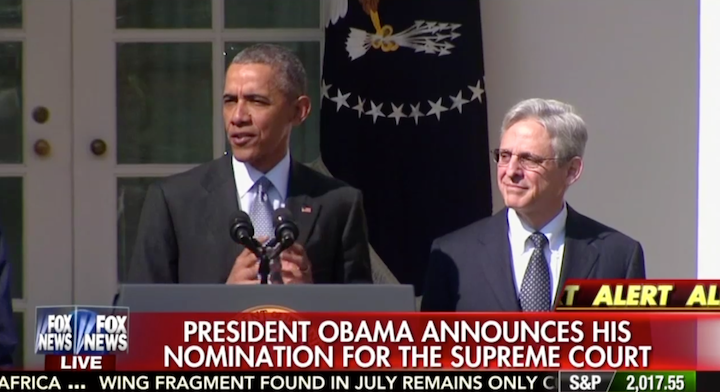 President Obama named his Supreme Court pick on Wednesday: Merrick Garland, Chief Judge of the United States Court of Appeals for the District of Columbia Circuit. Garland is considered a true moderate, but a more accurate description would be that he is the most moderate pick one could expect to come from a very liberal president such as Barack Obama.

In nominating Garland, President Obama threw down the gauntlet against Senate Republicans wishing to uphold the tradition of not considering new Supreme Court Justices during an election season:

To suggest that someone who is as qualified and respected as Merrick Garland doesn't even deserve a hearing let alone an up or down vote in an institution as the supreme court when two thirds of Americans believe otherwise would be unprecedented. To suggest that someone who has served his country with honor and dignity, distinguished track record of delivering justice for the American people might be treated as one Republican leader stated as a political piñata, that can't be right. Tomorrow judge Garland will travel to the hill to meet with senators one on one. I simply ask Republicans in the senate to give him a fair hearing and an up or down vote.

This is not the first time Garland has been considered for the nation's highest court. According to SCOTUSblog.com, Garland was on Obama's short list to replace Justice Stevens.  At the time,  it described him as someone not likely to legislate from the bench:

In 1995, President Clinton nominated Garland for an opening on the D.C. Circuit, and he received a hearing in December of that year.  During that confirmation hearing, Garland was asked about "judicial activism."  He answered that "[f]ederal judges do not have roving commissions to solve societal problems.  The role of the court is to apply law to the facts of the case before it "“ not to legislate, not to arrogate to itself the executive power, not to hand down advisory opinion on the issues of the day."

However, Judge Garland is not as moderate as the liberal media and the president claims. He has been on the D.C. Court of Appeals for 19 years, which enabled Obama to present him as an experienced Judge, but it also presents a long track record of rulings to pick through.

Garland would not be the pick for any supporter of the Second Amendment. In the case of  Parker v. District of Columbia, Judge Garland proved himself to have a more liberal view of the Second Amendment (the case became District of Columbia v. Heller when it went to the Supreme Court). In 2007, a three-judge panel of the D.C. Court of appeals overturned a District of Columbia law passed which banned all ownership of hand guns by individuals, even if they were kept in the home for self-defense. As is their right, the D.C. government asked for a rehearing of the case before all 10 judges of the appeals court. While six judges voted not to rehear the case, four of the judges, including Garland, voted for a rehearing, an indication that they wanted the opportunity to uphold the restrictive gun law. The law was eventually struck down by the Supreme Court.

In 2000, Garland ruled in favor of federal government plan to retain Americans’ personal information from background checks for firearm purchases.

Those who may be worried about President Obama overstepping his bounds with executive actions will find the judge someone likely to support those actions in the court.

Garland was on a three-judge panel that upheld EPA's mercury standards for power plants in 2014. That rule was later knocked down when the Supreme Court ruled EPA hadn't properly considered costs, and the D.C. Circuit sent the rule back to the agency to bring it in line with the ruling.

Also last year, Garland joined his colleagues in rejecting a challenge to the Interior Department's plan for oil and gas leases on the outer continental shelf.

In a way, by nominating Judge Merrick Garland, President Obama has already acknowledged defeat. Garland is not the "legacy pick" to permanently change the court most liberals expected. At age 63, Judge Garland is ten years older than the average Supreme Court nominee, which among other things means that, if confirmed, he is likely to serve a much shorter time than the typical justice.

What the nomination sets up is a fierce battle, with the President and Democrats pushing for the Senate to evaluate and vote on Judge Garland and the Republicans insisting that no candidate will be evaluated until the next president takes office.

Immediately after the nomination ceremony ended, Senate Majority Leader Mitch McConnell (R-KY) took to the Senate floor to announce there would be no change in the GOP position:

As (Judiciary Committee) Chairman (Chuck) Grassley and I declared weeks ago, and reiterated personally to President Obama, the Senate will continue to observe the Biden Rule so that the American people have a voice in this momentous decision.

The American people may well elect a President who decides to nominate Judge Garland for Senate consideration. The next president may also nominate someone very different. Either way, our view is this: Give the people a voice in the filling of this vacancy.

Let me remind colleagues what Vice President Biden said when he was Judiciary Chairman here in the Senate:

'It would be our pragmatic conclusion that once the political season is under way, and it is, action on a Supreme Court nomination must be put off until after the election campaign is over. That is what is fair to the nominee and is central to the process. Otherwise, it seems to me…we will be in deep trouble as an institution. Others may fret that this approach would leave the Court with only eight members for some time, but as I see it…the cost of such a result — the need to reargue three or four cases that will divide the Justices four to four — are quite minor compared to the cost that a nominee, the President, the Senate, and the Nation would have to pay for what would assuredly be a bitter fight, no matter how good a person is nominated by the President…

Folks, fasten your seatbelts, because it's going to be a very bumpy flight.

Below is a video of the Pres. Obama's nomination speech.