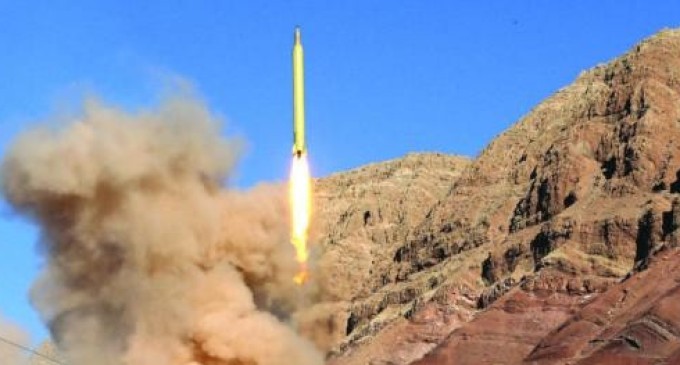 Last week, Iran launched several ballistic missiles across the country, which his in violation of United Nations Security Council resolution (UNSCR) 2231. While it is technically not a violation of the P5+1 deal, UNSCR 22331 approved the nuclear deal and limits their ballistic missile activity. The United States has been raising the issue of sanctions at the Security Council since Monday, but it now seems that Iran is going to get off scot-free. Neither Russia or China, both of which have a veto in the UN Security Council, will allow any resolution punishing Iran to be passed.

Making things worse, because of a last minute U.S. concession in the P5+1 talk, Russia and China may be on firm footing in their decision.

According to What in Blue, the disagreement stems from the U.S. collapse on ballistic missile sanctions that happened in the final negotiation round in Vienna last summer. When the talks began, UNSCR 1929 was in force and the language which banned Iran’s program read: “Iran shall not undertake any activity related to ballistic missiles.”

A few days into Vienna the Iranians demanded that the ban be lifted. The Americans collapsed in two ways: 1st, they agreed to sunset the entire ban in 8 years, 2nd they agreed to change the language that would apply over the next 8 years from “Iran shall not” to the “Iran is called upon not to” develop ballistic missiles.

The Russians are using the weakened language to claim Iran didn't violate anything with the tests:

"A call is different from a ban, so legally you cannot violate a call, you can comply with a call or you can ignore the call, but you cannot violate a call," Russian U.N. Ambassador Vitaly Churkin said on Monday. "The legal distinction is there."... Churkin also argued the U.N. resolution required a heavy burden of proof that the ballistic missiles were "designed to be capable of delivering nuclear weapons."

On Thursday evening, Reuters reported that the Iranians are taking a victory lap because Russia and China will protect them under all circumstances. They add that, anyway, the West doesn't really want to push back because they want access to Iran's markets:

"With Russia and China on Iran's side, there will be no resolutions, sanctions or any action against Iran over its missile or aerospace programs," said a senior official in Tehran... Now that sanctions on Tehran had been lifted, the official said Western countries were keen to do business in Iran. "Iran is not being seen as a danger any more even for the Western countries," the official said. "Iran is like a gold mine for them. They need us and we need them. So, why endanger this situation?"

Congress is frustrated. U.S. officials acknowledged on Tuesday that the new resolution was "drafted/structured in a way to appeal to Iran's sensitivities." Iranian Foreign Minister Zarif bragged the same day that the "designed" language specifically was meant to allow Iranian tests, saying "that word took me about seven months to negotiate, so everybody knew what it meant."

One might think these statements are difficult to reconcile with administration statements. For example Secretary Kerry was asked on Face the Nation  last July, why the U.S. was lifting ballistic missile restrictions and he snapped back “actually, we’re not."  And later he added.

So, we have an ability way beyond, nothing to do with this agreement, to continue to enforce those issues.

But as we learned from the U.N. Security Council, Kerry's statement doesn't hold up, the U.S. doesn't have the ability to support those issues.

There are two possibilities for the confusion:

Either possibility should make the American people worried, as it raises the possibility there is additional vague language in the agreement, or that there are other items where the Administration wasn't truthful.

In the end, with every ballistic missile test, the United States is further along the road to being less safe than it was before the P5+1 agreement.

As Mark Dubowitz, executive director of the Foundation for Defense of Democracies (FDD) and head of FDD's Center on Sanctions and Illicit Finance, wrote in a press release on Friday: