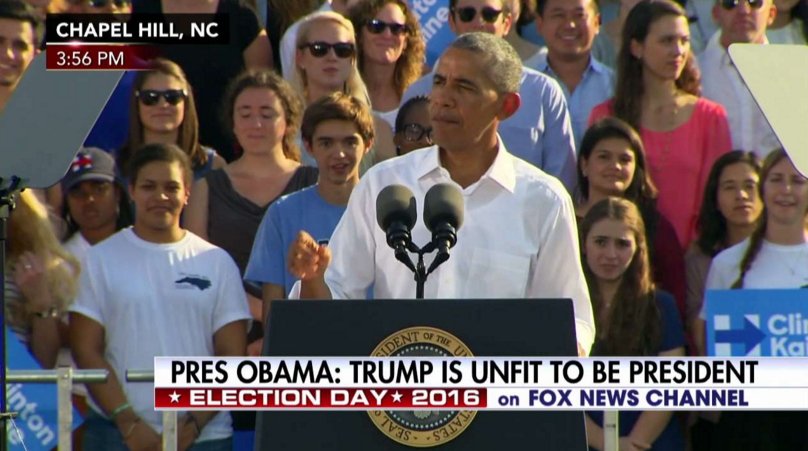 During his remarks in the battleground state, Obama told North Carolina voters that “the fate of the Republic” - and even "the fate of the world" - rests on their shoulders.

“The fate of the world is teetering, and you, North Carolina, are going to have to make sure that we push it in the right direction,” he added.

Obama to NC voters: "I hate to put a little pressure on you, but the fate of the Republic rests on your shoulders" https://t.co/Hp9KGIiyHz

Obama issued a similar appeal to black voters Wednesday morning, warning that a Trump presidency would undo his legacy.

The President criticized the Republican presidential candidate as “temperamentally unfit to be Commander-in-Chief.”

“The guy that the Republicans nominated, even though a bunch of them knew they shouldn’t nominate him … this guy is temperamentally unfit to be Commander-in-Chief and he is not equipped to be president,” Obama fired. “This should not be a controversial claim. It really shouldn’t. I mean it’s strange how, over time, what is crazy gets normalized.”

President Obama: "The guy the Republicans nominated ... is temperamentally unfit to be commander in chief" https://t.co/xvydt16k2J

"I've got Republican friends who don't think or act the way Donald Trump does," he said. "I ran against John McCain. I ran against Mitt Romney. I thought I'd be a better president. But I never thought the Republic was at risk if they were elected."

Obama in NC: "All of you are uniquely qualified to make sure this guy who's uniquely unqualified" isn't elected https://t.co/cMaRidUx3l

He went on to praise Hillary Clinton as "smart," "steady," and "tested," "a person worthy of your vote."