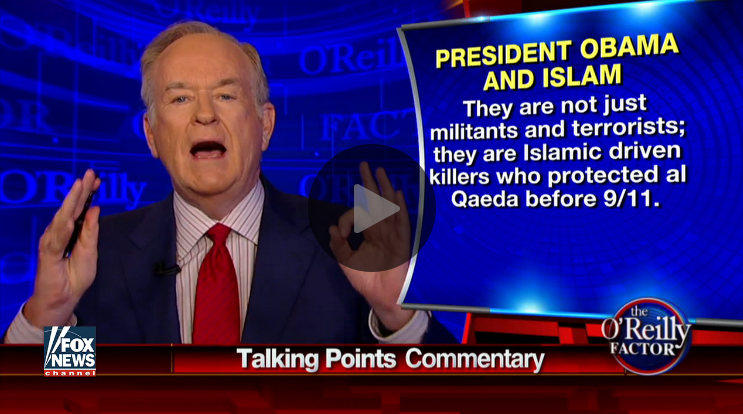 "The Factor" host argued that the President’s "emotional attachment to the Muslim world" has hurt the U.S.

“Many Americans, including this one,” said O’Reilly, pointing at himself, “believe Barack Obama’s emotional attachment to the Muslim world has hurt the USA.”

He added that there is "no question" that Obama's "greatest failure" has been to allow ISIS "to run wild."

“The Obama administration’s greatest failure is allowing the Islamic terror group ISIS to run wild,” he argued, “murdering thousands of innocent people all over the world including many Muslims.”

“Mr. Obama has never acknowledged that mistake nor has he defined the ISIS threat accurately,” said O'Reilly.

His harsh words come after President Obama neglected to use the word “Islamic” when describing Islamic terrorists during a press conference regarding military operations in Afghanistan on Wednesday.

"They are not just militants and terrorists,” said O’Reilly. “They are Islamic driven killers, who protected al Qaeda before the 9/11 attack."

O'Reilly went on to say that Obama should “aggressively call out those who abuse the Muslim faith” and “stop trying to diminish Islamic terrorism.”

"Radical Islam is a direct threat to the entire world,” he argued. “Whether they live in Afghanistan, Iran, Iraq, Syria or Africa, it is Islamic killers who are the central problem on the planet. President Obama should acknowledge that today and begin to correct his mistakes."