It really should come as no surprise that the establishment media would provide cover for the complete and utter failure that has been President Joe Biden’s regime, but this is ridiculous.

The New York Times (NYT) has a “live” approval rating and “latest poll numbers” thread on the outlet’s website, which keeps track of whether Americans believe Biden is doing a good or bad job.

Taking into account that it’s a “live” thread, you would think that the NYT would update it regularly. But, they don’t.

In fact, they haven’t updated the thread since May 10.

Just in case they mysteriously change it by the time you read this, here's a screenshot taken as of this writing: 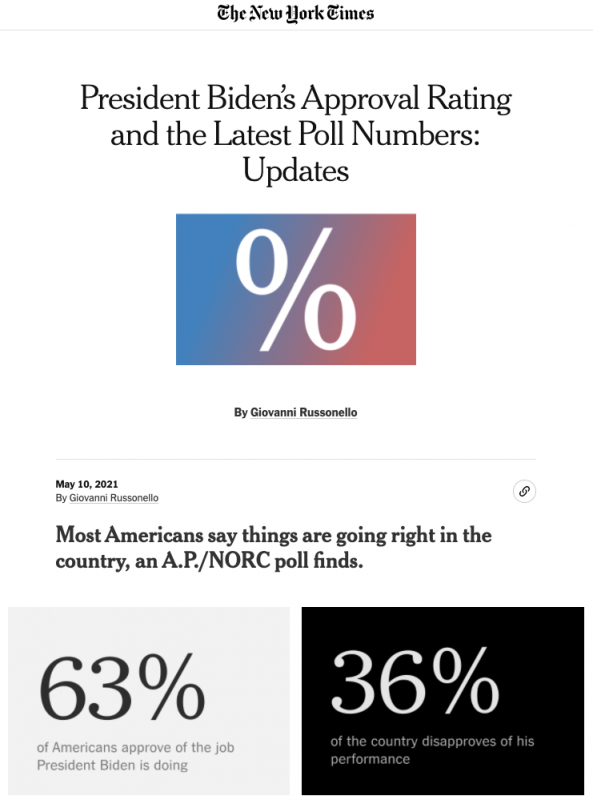 Gee, I wonder why.

Real Clear Politics (RCP) complies all the major polls and averages them out for an aggregate score. The average polling data between August 19 and September 2 indicated that Biden has an overall approval rating of 45.2 percent and a disapproval rating of 49.3.

Of the polls used to come up with the average, last month's USA Today/Suffolk University Poll ended up with the lowest approval rating for Biden, at just 41 percent. The NPR/PBS/Marist poll was the second lowest, coming in at 43 percent.

In contrast, The Hill/HarrisX poll showed respondents approving more of Biden than all the others with a 49 percent approval rating.

As you can see above, the NYT “live” approval rating thread still has the AP/NORC poll headlining the page, which will convince some that Biden — somehow — currently has a 63 percent approval rating.

The New York Times is portrayed as the most important newspaper in the country — you just wouldn’t know by their actual reporting, or lack thereof.