The New York Times on Monday issued a “correction” to their earlier reporting alleging that SCOTUS Justice Brett Kavanaugh sexually assaulted a woman at a college dorm party when some of his buddies “pushed” his genitals into a woman’s hands against her will.

And that “correction” wasn’t exactly a minor one.

The Times updated their piece to include the fact that the alleged victim in the whole incident said she has no memory of the event. Which, of course, seems like a relevant tidbit to have included in the original story – until, of course, you remember that this is the New York Times.

The allegation was supposedly made by a former classmate of Kavanaugh’s, Max Stier, who reportedly told the FBI he saw Kavanaugh expose himself at a frat party in college some 30-odd years ago, according to the Times. While Stier has declined to talk about the incident publicly, two Times reporters got ahold of his testimony from someone else and ran with it as the Gospel truth.

Those same reporters, however, never actually spoke with the woman who was supposedly victimized by Kavanaugh and his friends – a woman who apparently says she doesn’t remember anything of the sort. That pertinent fact that was notably absent from the Times’ original hit piece, which was immediately seized upon by others in the liberal media as well as left-wing lawmakers who used the unsubstantiated claims to demand Kavanaugh's resignation and bolster their own "pro-woman" platforms.

That is, until the Internet learned it was included in the larger tell-all book from which the Times' article was pulled. Amid the resulting firestorm, the Times issued a "correction" to their reporting, adding that their supposed victim may not have actually been a victim at all.

"An earlier version of this article, which was adapted from a forthcoming book, did not include one element of the book's account regarding an assertion by a Yale classmate that friends of Brett Kavanaugh pushed his penis into the hand of a female student at a drunken dorm party," The Times wrote in a correction Monday. "The book reports that the female student declined to be interviewed and friends say that she does not recall the incident. That information has been added to the article." 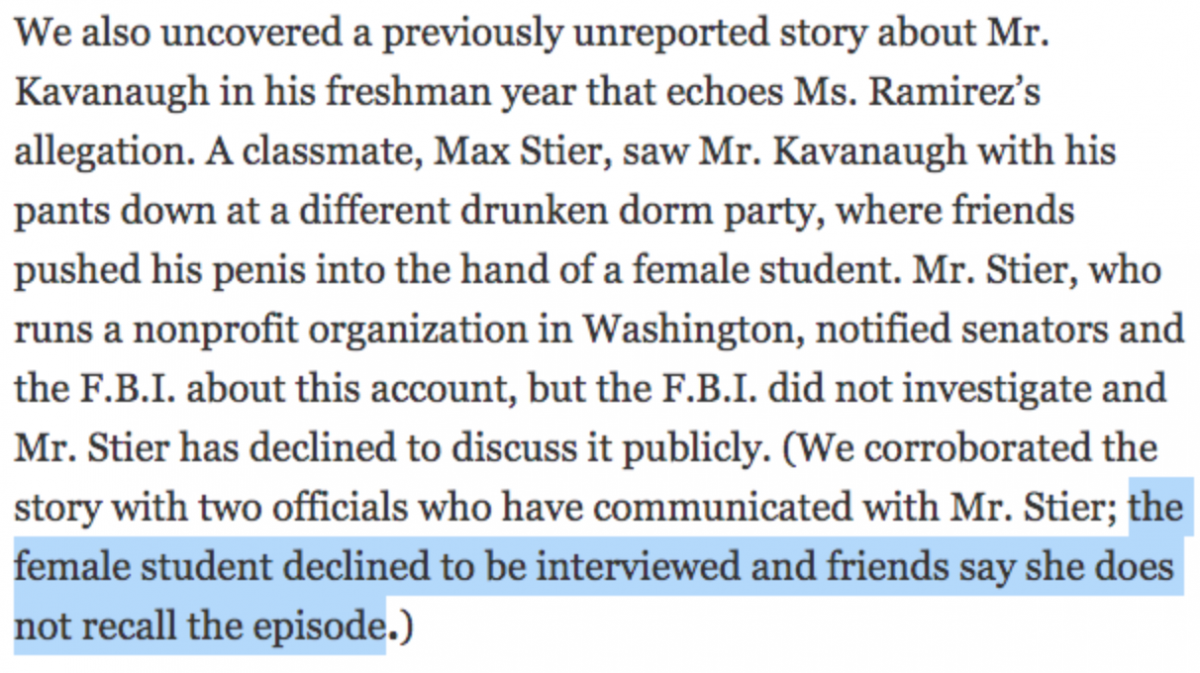 “That information has been added to the article.” Seriously? Here we’ve got a national news outlet publishing unverified claims of sexual misconduct against a sitting SCOTUS Justice – claims that Democrats are now using to call for his impeachment – and the Times never bothered to include that the alleged victim denies the whole thing?

And they wonder why Trump calls them the “enemy of the people.”

This. This would be why.