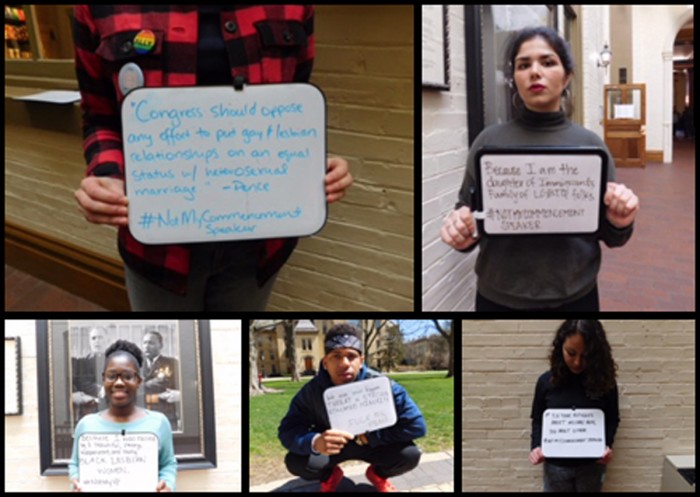 Seniors at Notre Dame University are suffering from painful emotional boo-boos over Vice President Mike Pence being slated to speak at their commencement ceremony on May 21.

A couple of graduating seniors, who are presumably about to pass from the liberal cradle of college life into the adult Land of No One Gives a Rip, were so distraught over Pence’s impending visit that they organized a protest for those who feel “unsafe” with the vice president coming to campus.

A Facebook page for the event, first reported on by Campus Reform’s Amber Athey, states:

We are inviting all those who would like to participate to take photos, holding a white board in your hands with direct quotes from Pence that are racist, sexist, homophobic, xenophobic, offensive, or ostracizing to members of our community. You may also write why you feel unsafe with the presence of Mike Pence on our campus. All Seniors and those graduating this may are invited to use the hashtag #NotMyCommencementSpeaker and everyone else is invited to use the hashtag #NotMyVicePresident.

“For me personally, [Pence] represents the larger Trump administration, [and] his administration represents something, and for many people on our campus, it makes them feel unsafe to have someone who openly is offensive but also demeaning of their humanity and of their life and of their identity,” whined senior Imanne Mondane, one of the leaders of the movement, in The Observer (Notre Dame’s student-run newspaper).

Mondane adds that the presence of Mike Pence, who’s a devout Christian, somehow violated Catholic teaching, although she wasn’t specific about how.

Participating snowflakes reportedly paraded around with their complaints over this past weekend – about a month and a half before Pence is actually supposed to show up for the graduation ceremony.