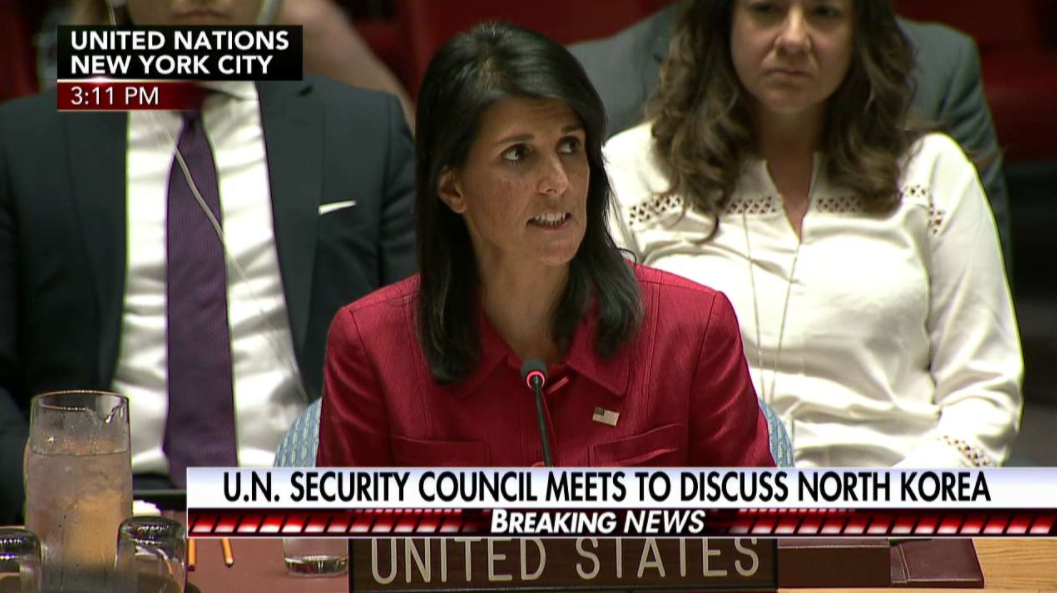 In response to North Korea’s launching of an intercontinental ballistic missile, or ICBM, on Tuesday as America celebrated its Independence Day, U.S. Ambassador to the United Nations Nikki Haley called for stronger measures to hold the DPRK accountable.

“North Korea's launch of an ICBM is a clear and sharp military escalation,” she said at an emergency meeting of the U.N. Security Council on Wednesday. "North Korea's destabilizing escalation is a threat to all nations."

"For many years, there have been millions of U.N. sanctions against North Korea, but they have been insufficient to get them to change their destructive course,” said Haley. “So in order to have an impact, in order to move North Korea off its military escalation, we must do more.”

Haley said that the U.S. “will not look exclusively at North Korea,” but also at “any country that chooses to do business with this outlaw regime.”

She added that the U.S. will not accept any “watered down resolution” with North Korea as its dictator Kim Jong Un continues his provocations.

.@nikkihaley: "To move North Korea off its military escalation we must do more." pic.twitter.com/ACTKC2aEy8

In a show of force, the U.S. and South Korea on Wednesday fired "deep strike" precision missiles off South Korea's east coast, the Associated Press reports.

"North Korean state media described leader Kim as 'feasting his eyes' on the ICBM, which was said to be capable of carrying a large nuclear warhead, before its launch," writes AP. "'With a broad smile on his face,' Kim urged his scientists to 'frequently send big and small ‘gift packages’ to the Yankees,' it said, an apparent reference to continuing the stream of nuclear and missile tests Kim has ordered since taking power in late 2011."

Here’s a CNN report with footage of the missile being launched, broadcasted by North Korean state media.

After its latest missile test on July 4, North Korea claims it now has the power to strike the American mainland https://t.co/kYUyWoBI4f pic.twitter.com/QisO0r7XDe