The NFL is lying to you. It’s like the National Football League (NFL) is intentionally trying to sabotage itself with this latest story that can only be classified in the “shoot-yourself-in-the-foot” category.

A proposed Super Bowl ad from American Veterans (AMVET) simply asking people to “#PleaseStand” during the national anthem has been rejected by the NFL, because it would distract viewers from focusing on the game itself.

The NFL’s Vice President of Communications Brian McCarthy told the Army Times that the Super Bowl “is designed for fans to commemorate and celebrate the game, players, teams and the Super Bowl. It’s never been a place for advertising that could be considered by some as a political statement.”

That statement might be true for the program that the people attending the event see — but if the NFL is claiming that they don’t want to get political for the Super Bowl in general — that’s a lie.

A simple YouTube search for “political Super Bowl ads” brought up a result of a story “CBS Evening News” released just after last year’s Super Bowl in which CBS details how the NFL went very political with the Super Bowl commercials that aired.

Who does the NFL think they’re kidding? So they won’t broadcast an ad from veterans, because it could be too political for some and distract people from the game. But doesn’t that already happen with the political statement coming in the form of players kneeling during the anthem?

The NFL and people like Commissioner Roger Goodell think we’re all so stupid to the point that they talk our of both sides of their mouths. Seriously, I’m still wondering how this guy secured a $40 million a year contract extension when he should be out of the league. Goodell joined serial scumbag Matt Lauer on “Today” in September 2016 to talk about the new-at-the-time Colin Kaepernick kneeling controversy. This doofus had the gall to say in the same paragraph that he not only supports Kaepernick, but the military as well and how they protect our freedoms. Hey, Goodell. How about a little consistency?

In a letter to the NFL, National Commander of AMVET Marion Polk called the league out for its double standard on free speech.

Here’s part of what Polk wrote:

In closing, freedom of speech works both ways. We respect the rights of those who choose to protest, as these rights are precisely what our members have fought — and in many cases died — for. But imposing corporate censorship to deny that same right to those veterans who have secured it for us all is reprehensible and totally beyond the pale.

The NFL’s intention to avoid controversy in this instance by suppressing our voice will have the opposite effect, and it will not be taken lightly by the hundreds of thousands of voices that AMVET represents.

Polk also sent out this tweet regarding the matter: 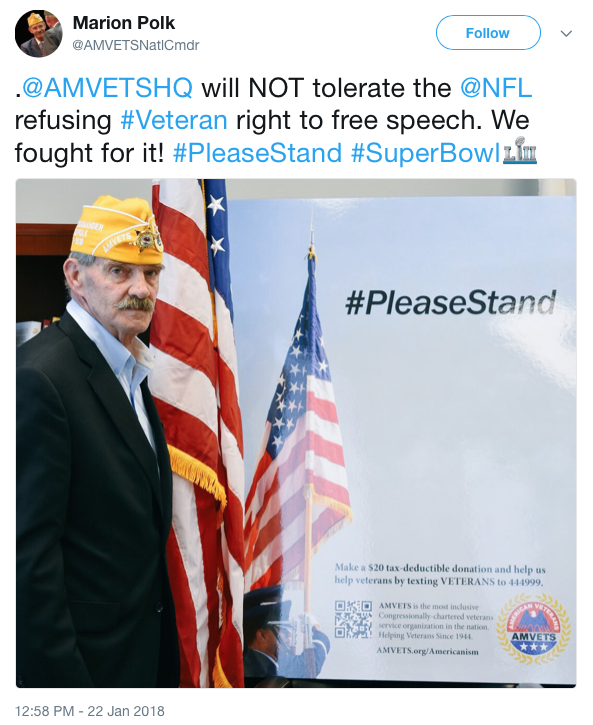 Not only has the NFL been caught in a very public lie, but they’re also squelching the freedom of speech of those who fought to protect the right of those to kneel.