*Update: An NBC representative told MRCTV in an email that Kurt Eichenwald has not been an MSNBC contributor since February of this year. I'd apologize for reporting otherwise, but apologies apparently don't amount to a hill of beans anymore.

Newsweek senior writer and former MSNBC contributor* Kurt Eichenwald just found himself in a giant steaming pot of hot water after he went after Parkland student survivor Kyle Kashuv of Twitter – just before apologizing for attacking the wrong kid.

In a now-deleted series of tweets, Eichenwald, who’s also a contributing editor for Vanity Fair, insultingly accused Kashuv of “trafficking in fantasies” and continuing to "disappoint.” 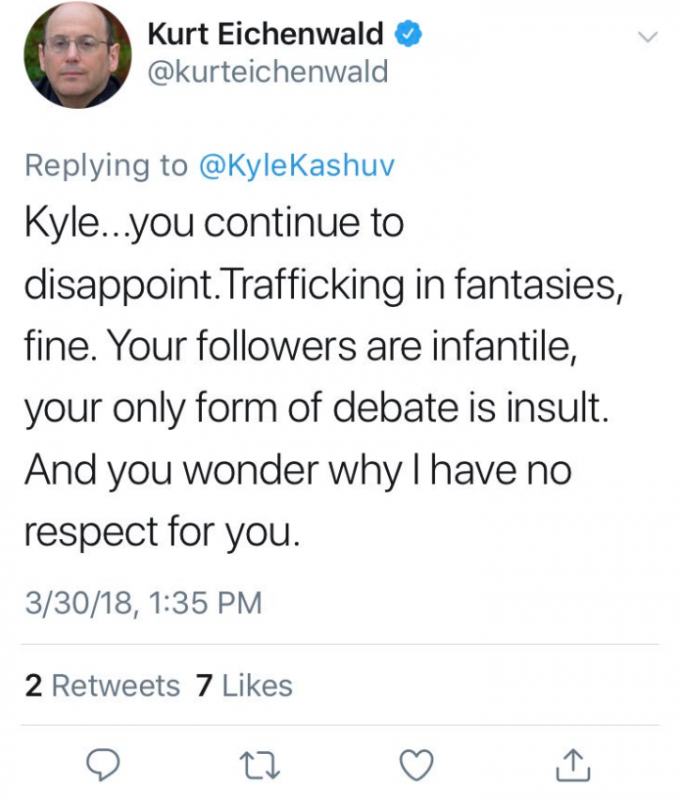 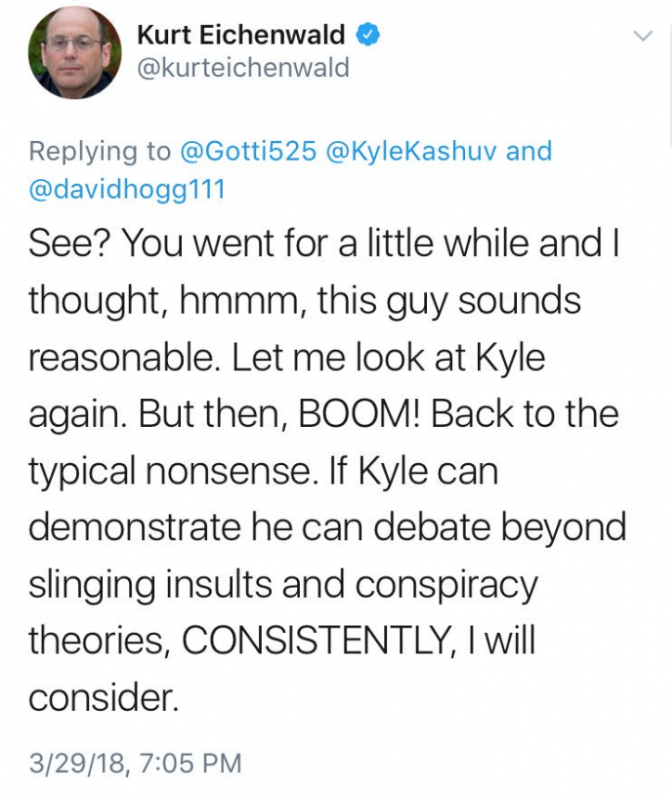 Unfortunately for him, Twitter was quick to point out Eichenwald’s own condemnation of those who’ve spoken out against Parkland survivors-turned-anti-gun activists Emma Gonzalez and David Hogg:

Some conservative pundits will never understand -YES, attacking the Parkland kids personally, insulting HOW they said things rather than substance of what they say, is off limits.

Eichenwald quickly deleted his incendiary statements, claiming that he’d actually meant to insult a different high school kid (whose name he "can't remember") and gotten Kyle’s name mixed up, instead:

I owe an apology to @KyleKashuv. I have no idea how many times I have commented to him. There is a high school kid who has a podcast who keeps challenging me to debates with insults. I mixed up their names. Please ignore every tweet Ive sent. They were written for someone else.

Contrary to his peers, who’ve continued to bash conservative writer Laura Ingraham and her recently apology to Hogg over statements she made about his college rejections, Kashuv had perhaps the classiest possible response to Eichenwald’s alleged “mistake”:

On a more serious note, Kurt: If you made a mistake and you’re truly sorry, apology accepted. We should all be more forgiving — including you (and others) of Laura Ingraham.

When will you and MSNBC do the same for Laura? https://t.co/x8W5mkD85T

Daily Wire Editor-in-Chief Ben Shapiro, however, wasn’t as quick to let it go, pointing out that accepting heart-felt apologies for making a mistake no longer flies with the left:

I agree, @kylekashuv. But it's too late. The standard has been set. @MSNBC, what do you have to say about one of your contributors attacking a Parkland survivor? How about you, @VanityFair? https://t.co/LEwdqwamlu

MSNBC's top advertisers for Q1, according to Adweek: @smiledirectclub@jeep@proactiv@officedepot@cadillac@trivago@sleepnumber@omahasteaks

So, are we agreed that apologies for saying dumb things should be accepted rather than simply boycotting each others' advertisers? Or do you want to play this game, @MSNBC and @kurteichenwald? https://t.co/ojTaqGpQmU

But then again, this is the radical Left, who perpetually live in the Land of Eternal Double Standards.