A Newsweek Pakistan editor has been forced to apologize after sparking outrage on Twitter Tuesday by claiming that child sex abuse “sometimes leads to great art.”

Newsweek Pakistan editor Fasih Ahmed lit up the Twittersphere yesterday with what’s potentially the most poorly constructed and atrocious tweet in social media history (which has since, of course, been deleted): 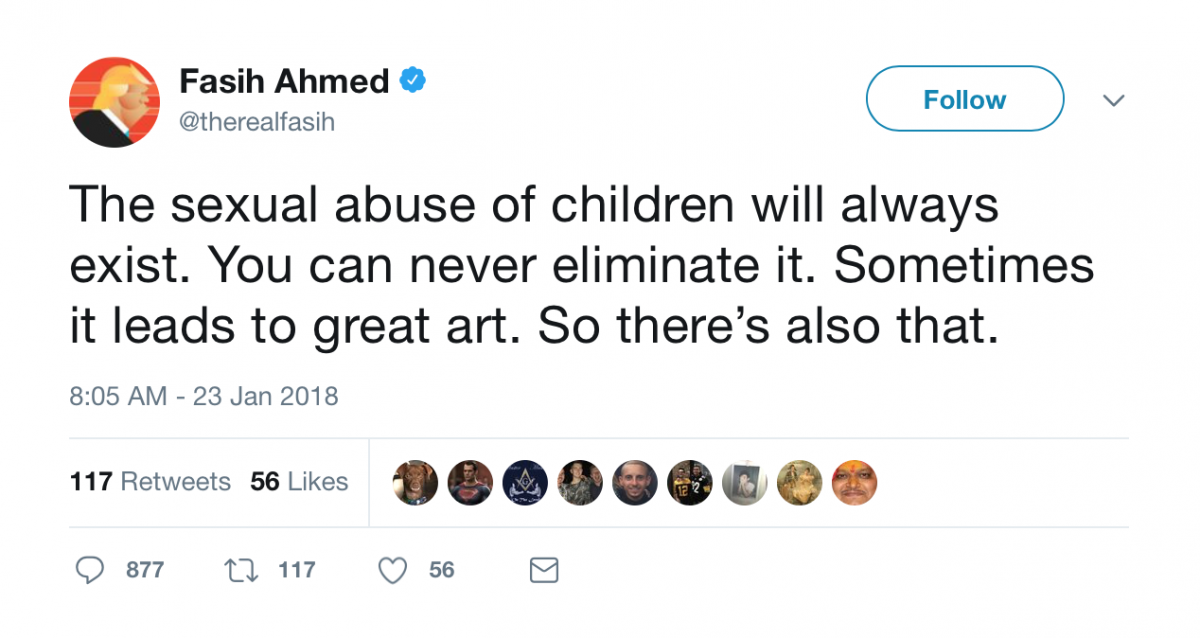 It’s not clear exactly how Ahmed thinks raping children leads to “great art,” and I really don’t want to know. However, if you're able to link child abuse and "art" in the same sentence in any way, please check yourself into the nearest psychiatric facility post haste.

Ahmed later deleted the tweet and apologized – not necessarily for saying what he said, of course, but for the fact that everybody else “misread” it.

My tweets of yesterday were coming from anger, were poorly phrased, and misread. I’m sorry to have upset the people who have survived child abuse. I have been angry at the conspiracy of silence around this evil. #MeToo #StopChildAbuse

Ahmed went on to condemn child abuse in a short series of tweets, often referring to the recent horrific case out of Pakistan in which a 6-year-old girl named Zainab Ansari was found raped and murdered in a trash heap in her hometown of Kasur. And I'm fairly certain no "great art" has come out of that one.

Recent tweets by Newsweek Pakistan editor @therealfasih do not represent the views of @Newsweek. We are reviewing our relationship with @NewsweekPak, which operates under a license agreement.

Ahmed was also ousted from his spot on the Lahore Literature Festival board early Wednesday.