New Website: If Healthcare Bill Kills You, 'Send Your Ashes to the GOP'

Dust to dust. Ashes to GOP? No. Something doesn’t sound right about that phrase.

Actually, ashes to GOP is for real. No joke.

In the wake of the majority of House Republicans passing the American Health Care Act, freeloaders everywhere are freaking out to the point of extreme morbidity.

To absolutely no one’s surprise, a college student in Washington D.C. created a website in which people who blame their “impending” death on the new “Trumpcare” bill can send their ashes to the GOP.

Here’s a look at the form the website provides to fill out in case of a GOP-induced demise: 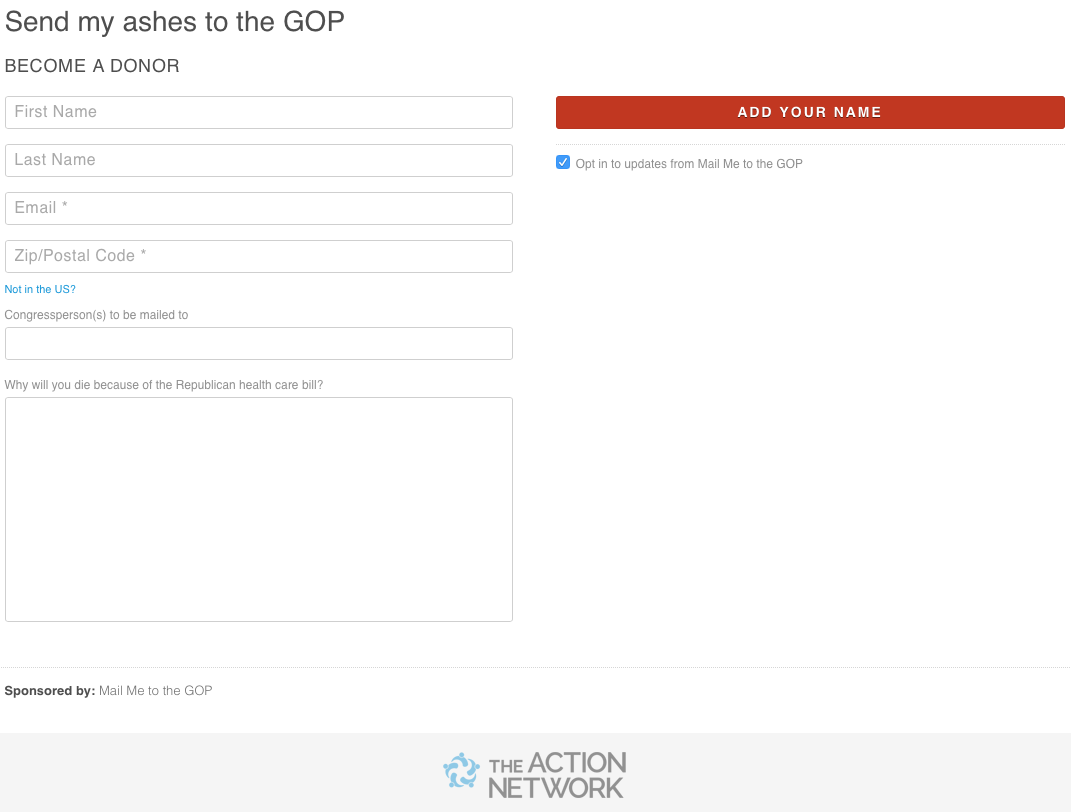 Yes. Your eyes are not deceiving you. This overly dramatic website is powered by the Action Network with the option to send your ashes to a specific Congressperson.

Just so you have an idea of the Mensa members we’re dealing with here, according to the Action Network’s website, “The Action Network is a progressive online organizing platform.”

Their Facebook page’s cover photo is of the modern feminists of the Women’s March on Washington that happened back in January.

“It’s really morbid and not fun to talk about,” the student, Zoey Salsbury, told the Huffington Post. “But that’s the reality of passing a health care bill like this.”

I understand that because young people nowadays have become professional students they feel the need to stay on their parents health insurance until they’ve suckled every last penny from their parents’ wallets. But, it’s time to cut the cord.

It might sound cold, but the time for personal and fiscal responsibility is here. Let’s hope that both of those things are covered with these proposed health care changes.

The bill will now go to the Senate where the current piece of legislation is reportedly going to see some rewrites.