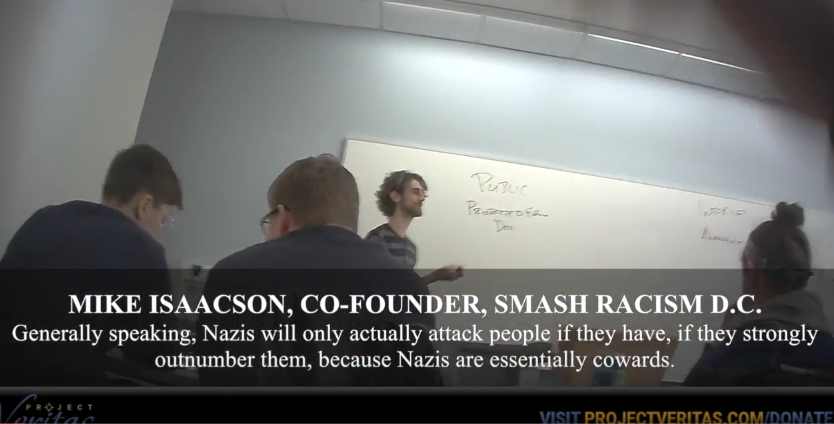 As if yesterday’s Project Veritas video wasn’t enough to prove just how crazy the left is over the election of President-elect Donald Trump, James O’Keefe's organization has come out with the second part of their undercover series on the inner-workings of the organizations planning to disrupt Trump inauguration on Friday.

O’Keefe begins his video by talking about a group known as DisruptJ20. J20 stands for Jan. 20, which is the date of the inauguration. It’s as if these yo-yos think that by shortening the date to J20, all of the non-hipsters won’t catch onto them.

The video shows how these Mensa members have been plotting to shut down the Metro rail system in Washington D.C. and other ways to literally disrupt the inauguration.

At one point in the video, a J20 organizer, Legba Carrefour, described one of the methods that these radical organizations might possibly attempt to use.

Carrefour can be found in the video saying:

So simultaneous to the checkpoint blockades in the morning, we are also doing a series of clusterf*ck blockades, where we are going to try to blockade all the major ingress points in the city. Which include, they can include shutting down major bridges and highway access points as well as shutting down metro rail. So to do that we are going to break into several teams kind of like the checkpoints.

Carrefour points out that there is the possibility of getting arrested.

Am I the only one who thinks the way these people speak makes them sound like the Joker talking about how he wants to bring chaos to Gotham?

Next, Carrefour is heard on an undercover microphone talking about how they would disrupt the Metro rail system. He spoke of how the J20 misfits could use chains to stop rail service to and from the inauguration.

“The idea was to hit Metro Center, Gallery Place and L’Enfant Plaza,” rambled Carrefour. "They are all close enough to walk to and that’s every single line in the city.”

O’Keefe then points out how “disabling trains constitutes an act of terrorism under 18 United States Code (USC) 1902.” Anyone engaging in such activities can face up to 20 years in prison, but if their actions result in someone’s death they could face life in prison or the death penalty.

The J20 group also talks of how they would use “the poor and homeless people” by giving them money and food to help block traffic.

The most insulting thing that came from this video is when Smash Racism DC co-founder, Mike Isaacson, basically equated all Trump supporters to Nazis. Forget the fact that liberals whackadoos like Isaacson constantly tell people not to judge others.

“Generally speaking, Nazis will only actually attack people if they have, if they strongly outnumber them, because Nazis are essentially cowards,” Isaacson opined.

While it can be agreed that Nazis are cowards, tactics like those used by Isaacson are eerily reminiscent of actual Nazis. He might need to revisit an unbiased history book (if they still exist).

When someone asked Isaacson--who didn’t look old enough to know who President George H.W. Bush is and shouldn't be teaching anyone--how to engage these “Nazis,” Isaacson replied, “I would say that’s where you do the throat punching. I’m going to be honest.”

So, in essence, these people want to resort to a violent tactic that could end up with someone being killed.

All because, for once in their miserable existence, these special little snowflakes didn’t get their way.

For part two of the Project Veritas inauguration series, watch below: