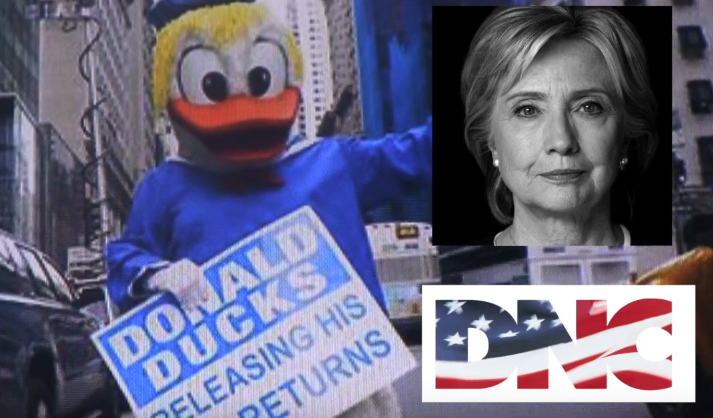 Creamer followed that statement up by telling the PVA journalist, "Don't repeat that to anybody."

Apparently, sometimes when these Democratic operatives talk about "ducks," they literally mean ducks. Creamer said at one point that his organization was going to have a guy dressed up like Donald Duck go down to Trump Tower and hold a sign saying, "Donald Duck's releasing his tax returns."

This is a slam against Trump for "ducking" when it came to releasing his tax returns. Back in August, there was literally a person in a Donald Duck outfit in front of Trump Tower holding a sign with the exact message Creamer referenced. 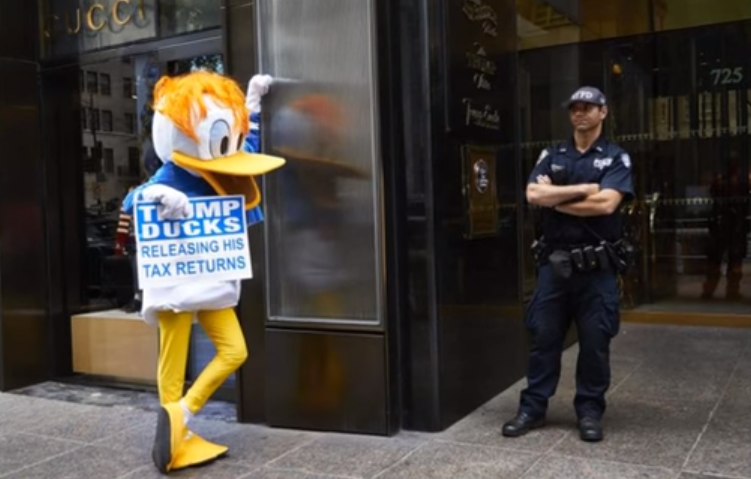 Later in the video Creamer was talking to Americans United for Change President, Brad Woodhouse, about the "mascot" strategy and what Hillary Clinton thought about it:

And Uncle Sam suits are easy to find for adults, but then I get a call -- actually on a plane about to go to London last week -- Christina Reynolds (Hillary campaign) calls and says, 'I've got good news and bad news. The good news is the candidate would like to have a mascot following around the duck. I mean Trump. But the bad news is she wants it to be Donald Duck.' And that's because Skalar is an old Clinton man. He had gone to some buddy of his who is one of her body people and she had explained the idea to Hillary. And Hillary just loved it.

Now it is clear what Creamer meant about Clinton wanting "ducks on the ground."

O'Keefe explains that the DNC, along with Democracy Partners and Americans United for Change, planned to do stunts like this all over the country wherever there would be Trump or vice presidential nominee Mike Pence events.

So, the operation is to insert and get the duck message in there if we can, or the extremist message, depending on...we have to clear this with the DNC, with Democratic National Committee, we have to clear which message we're going to be targeting at which event. But they can insert into multiple events, now, through the end of the election on a continual basis, on a daily basis. But basically do a chase all over the country.

Foval continued by speaking about how they want to get the "duck" message on the outside of Trump events as much as they can, and then "insert twenty to thirty people" inside the events in order for the media to take notice and push the narrative. Those people would have duck alarms go off at the exact same time during the event.

The motive in these cases was to induce and instigate confrontations and possible violence with Trump supporters.

"So, we want the media to notice the duck calls, so we have everybody load a ringtone on their phone that are all timed to go off at the exact same time," Foval noted.

The issue for the DNC and the organizations helping the Clinton campaign was copyright infringement of Disney's Donald Duck character. To get around this, the DNC dropped its association with the duck, and Americans United for Change "is now managing the duck."

However, Jenna Price, DNC Assistant Press Secretary, was on the Veritas video saying the following:

Last week, two videos claiming the 2016 presidential election has been rigged by the Clinton campaign, the Democratic National Committee (DNC) and organizations working for them were released.

The first video, released on Oct. 17, showed Foval saying that he had paid “mentally ill” and “homeless” people to instigate and incite altercations, sometimes violent, at Trump rallies.

Foval was subsequently fired for his comments and supposed actions.

The second video was released on Oct. 18, and showed Foval planning different ways to commit voter fraud in order to affect elections in favor of Democrats. Creamer resigned as a result of the second video.

The PVA videos have been the cause of major controversy as last Wednesday White House Press Secretary, Josh Earnest, told the media and public to use “extreme caution” when watching the videos despite two people having to lose their jobs over the matter.

“Despite what the name might suggest, these videos have not often revealed the truth,” Earnest said.

For the latest Project Veritas Action video, watch below: