Netayahu’s Son: Neo-Nazis Are ‘Dying Out,’ While Antifa Is ‘Getting Stronger and Stronger’

Yair Netanyahu, the son of Israeli Prime Minister Benjamin Netanyahu, posted a status on Facebook claiming ANTIFA and Black Lives Matter activists are a greater threat to the modern world than neo-Nazis.

In his Facebook post, Yair said that while the influence of neo-Nazis is fading, ANTIFA and Black Lives Matter are growing “stronger and stronger” and are becoming “super dominant” on American campuses and in American politics: 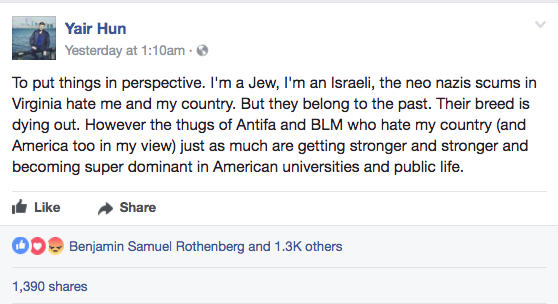 Yair’s status comes after President Trump received criticism for suggesting both sides of the conflict in Charlottesville are responsible for the escalation of violence, even condemning the “alt-left.”

Trump’s other statements on Charlottesville, including the one explicitly condemning Nazis by name, have also been criticized as not being strong enough.

Like Trump, Yair’s father has also received scrutiny for not seeming tough enough on Nazis. Despite the official Israeli Prime Minister’s Twitter account denouncing the hatred in Charlottesville, an opinion column in Haaretz attacks Netanyahu for not condemning Nazis soon enough.

Opposition politician Mickey Rosenthal reportedly responded to Yair’s remarks by calling him “Netanyahu Jugend,” a reference to the Nazi Youth, before apologizing for his remarks.