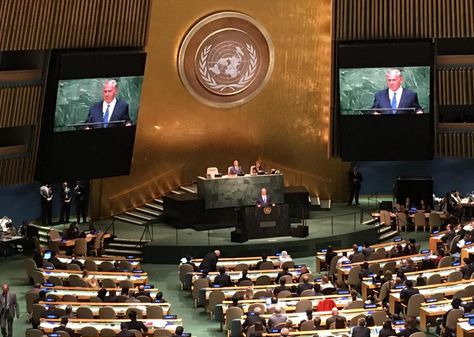 He scolded participating world leaders for voicing their support and enthusiasm for such an agreement while evidence of Iran’s continued hostility toward Israel stares them straight in the eye.

"A few days after the nuclear deal was announced, [Iran's Supreme Leader Ali Khameini] released his latest book," said Netanyahu. "It's a 400-page creed detailing his plan to destroy the state of Israel."

"Last month, Khameini once again made his genocidal intentions clear before Iran's top clerical body," he went on. "He pledged, quote, there will be no Israel in 25 years, end quote."

“Iran’s rulers promised to destroy my country – my people. And the response from this body – the response from nearly every one of the governments represented here – has been absolutely nothing," said Netanyahu. "Utter silence... Deafening silence."

To underscore his point, the prime minister took a long pause – a full 42 seconds long –  that communicated his grave concern for the safety of his people in a way that words could not.

Ending his moment of silence, he solemnly noted,

“Perhaps you can understand why Israel is not joining you in celebrating this deal."

Bibi urged the UN to ensure that the Iran nuclear deal be enforced with “rigor,” that "the inspectors actually inspect,” and that “Iran’s violations aren’t swept under the Persian rug.”

“But one thing I can assure you: Israel will be watching closely,” he warned.