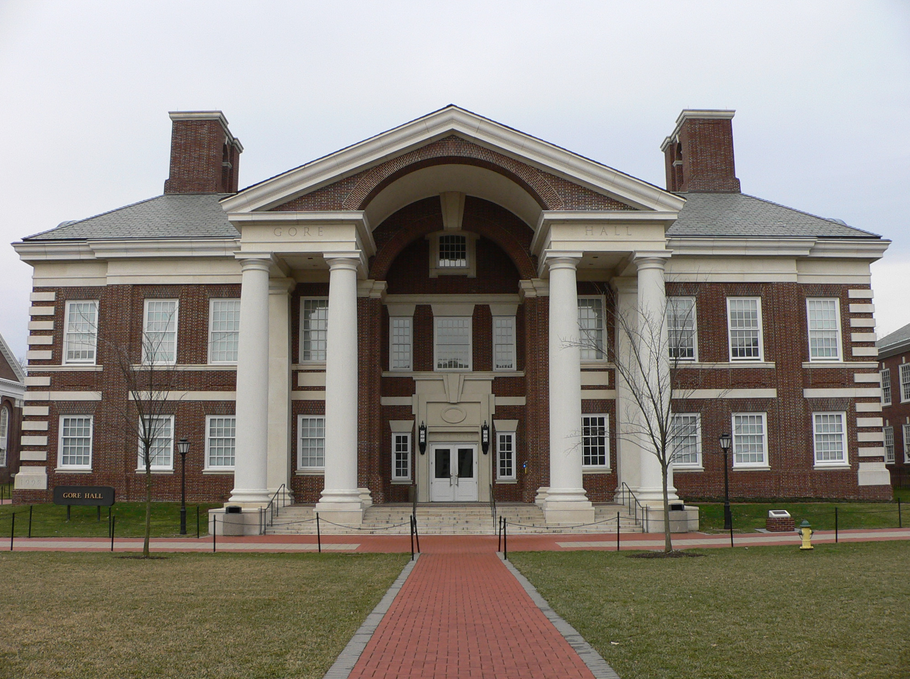 Employees at nearly 100 schools across the country are potentially being required to take a “Preventing Sexual Misconduct (Title IX)” course that promotes misleading statistics about the prevalence of rape on campus, endorses the narrative that repeated requests for sex constitute a form of “sexual violence,” and dismisses concerns about sexual misconduct training interfering with freedom of speech.

A screenshot provided to MRCTV by an employee at the University of Delaware shows a pop quiz in a “Preventing Sexual Misconduct (Title IX)” course requires staff to answer the question: “Which of the following statistics about sexual assault on campuses is/are true?” 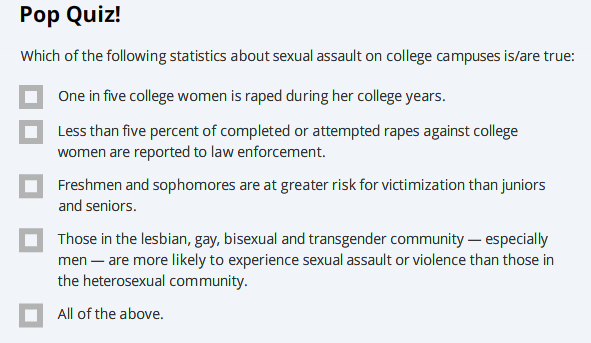 To proceed in the course, university employees must answer, “All of the above.”

In an email sent by the university’s Title IX coordinator and director of equity and inclusion, Susan Groff Costa, University of Delaware staff were informed they have 30 days to complete the course and the quiz: 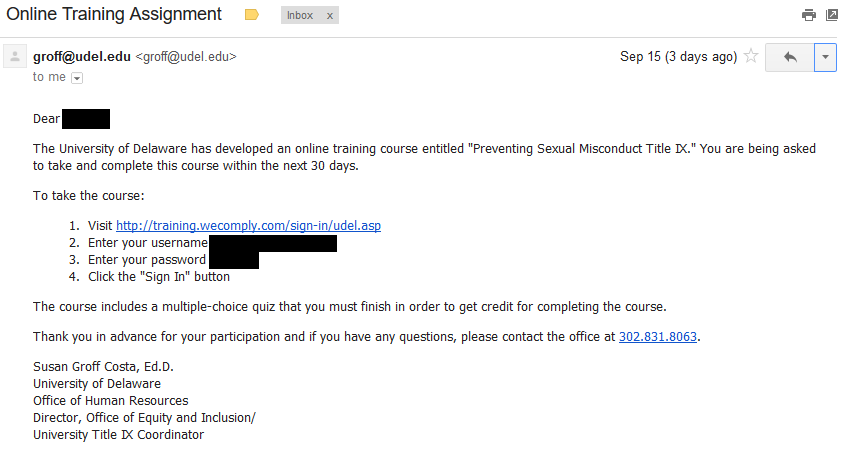 The external relations director for the University of Delaware, Andrea Boyle, confirmed the content of the quiz to MRCTV.

The “one in five college women is raped during her college years” statistic, in particular, has been the source of controversy.

Two of the individuals involved in the Campus Sexual Assault Study—from where the “one in five” statistic derives—penned an article in Time to speak out about how their study cannot be used to broadly claim, “one in five college women is raped during her college years.”

According to two of the Campus Sexual Assault Study's researchers, Christopher Krebs and Christine Lindquist, the “one in five” statistic is “not a nationally representative estimate of the prevalence of sexual assault, and we have never presented it as being representative of anything other than the population of senior undergraduate women at the two universities where data were collected—two large public universities, one in the South and one in the Midwest.”

The “one in five” number also “includes victims of both rape and other forms of sexual assault, such as forced kissing or unwanted groping of sexual body parts.”

Therefore, Krebs and Lindquist, assert, “To limit the statistic to include rape only, meaning unwanted sexual penetration, the prevalence for senior undergraduate women drops to 14.3%, or 1 in 7 (again, limited to the two universities we studied).”

Krebs and Lindquist also express concerns with the response to their Campus Sexual Assault Study survey.

Boyle told MRCTV the pop quiz question that relies on the “one in five” statistic is just “one component of an online course that University employees (including student employees) are required to complete.”

Boyle confirmed to MRCTV that the university did not know the source of statistics used in the pop quiz; rather, the course was purchased from Thomson Reuters.

The “Preventing Sexual Misconduct (Title IX)” course is part of a larger “WeComply” training service provided by Thomson Reuters. The URL provided to employees at the University of Delaware leads staff to a page requesting them to enter their username and “WeComply” password.

The senior public relations director for Thomson Reuters, Lemuel Brewster, told MRCTV he is “pleased to confirm that we currently have just under 100 Colleges and Universities that utilize our services, including this specific course.”

Brewster also informed MRCTV that, among the top 100 schools in the United States, ten schools currently use the sexual misconduct course.

The course is described as 35-minute class that “provides training on preventing sexual misconduct, as required by Title IX of the Education Amendments of 1972. Federal guidelines require Title IX training for all employees of colleges and universities.”

Although the federal government only requires Title IX training for college and university employees, Thomson Reuters also provides versions of the course for graduate and undergraduate students. There is also a “free trial” available for individuals to try to learn about whether they would like to utilize the course.

During the course, individuals click through various facts and popular headlines about sexual assault while intermittently checking their “understanding” by answering pop quizzes.

At the end of the course, people are prompted to take a quiz: either as an interactive video game or a short multiple-choice quiz.

One of the questions asked during the quiz portion involves an incident between a man named “Matthew” and a woman named “Jenny.” Allegedly, Matthew “pestered” Jenny to have sex with him. One night, after Jenny had been drinking, she consented to having sex with Matthew. The next day, Jenny recounted the incident to a school counselor named “Gwen.” The quiz then asks, “Should Gwen inform the Title IX coordinator?”

The possible answer choices are:

According to the Thomson Reuters quiz, the correct answer to the question is simply, “Yes.” Allegedly, Gwen has a “duty” to report the incident: 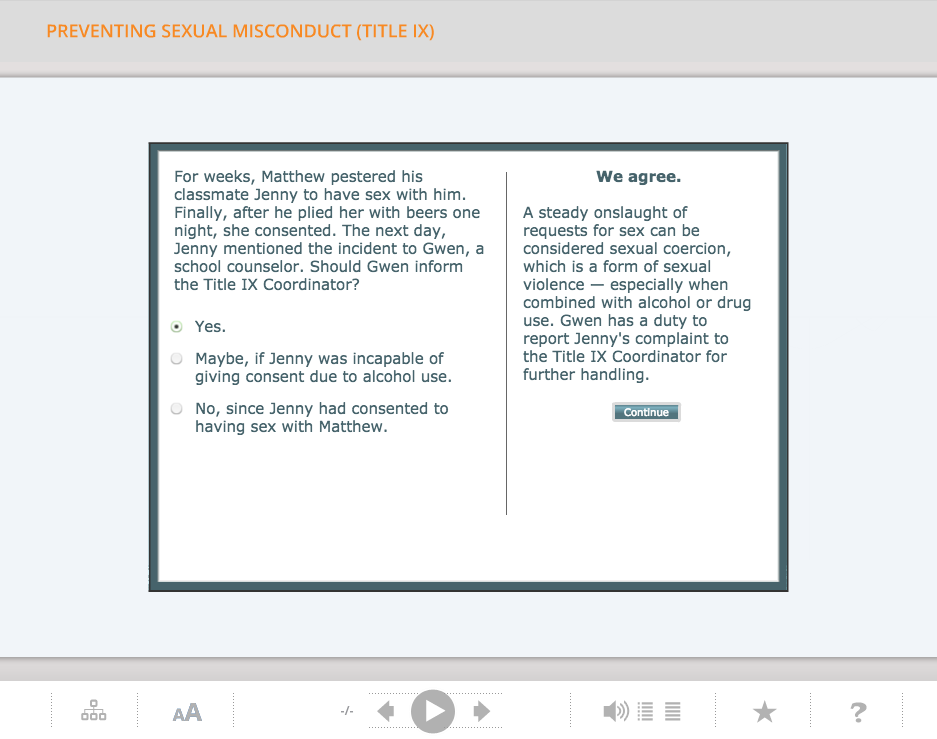 Instead of the “correct” answer being that the incident does not need to be reported as Jenny had consented, or simply the popular theory that Jenny was rendered incapable of consent due to alcohol use, the quiz insists a “steady onslaught of requests for sex can be considered sexual coercion” which is a “form of sexual violence—especially when combined with alcohol or drug use.” Therefore, Jenny was not responsible for her decision to have sex with Matthew, because persistently pursuing someone for sex is allegedly a form of “violence.”

Another question posed during the quiz is, “Which of the following is not a reason to be concerned about sexual misconduct on our campus?”

The prospective answers to the question about what is “not a reason to be concerned about sexual misconduct” are: “Harm to our right to free speech, “Harm to our organization’s reputation,” and “Harm to our students’ and employees’ morale.”

The correct answer to the question is, apparently, that the right to free speech is not a reason to be concerned about sexual misconduct on our campus: 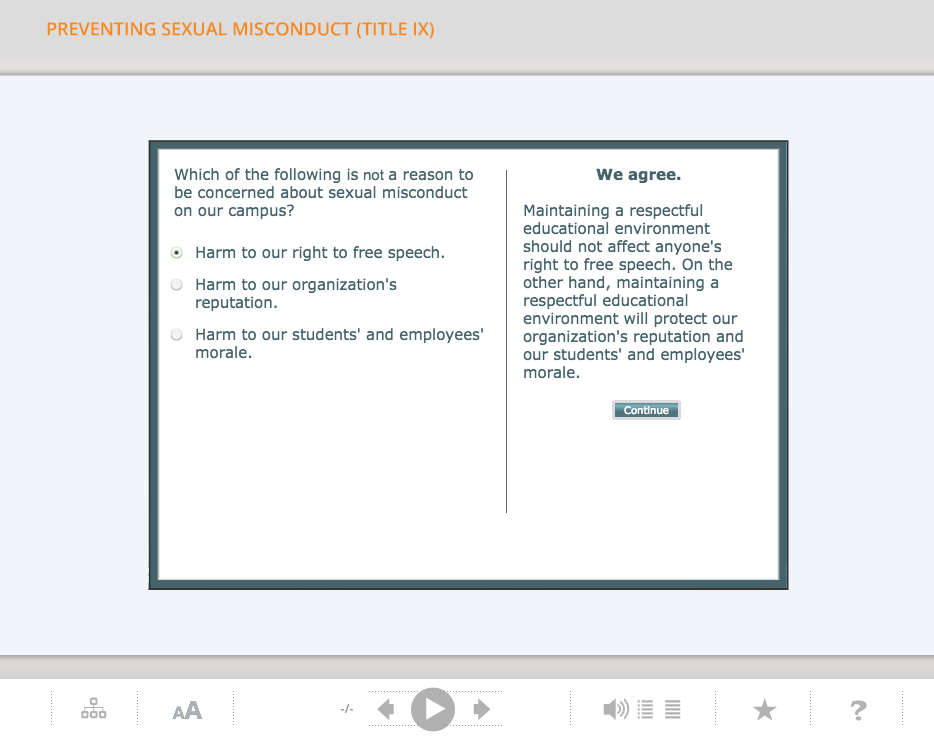 The quiz insists, “Maintaining a respectful educational environment should not affect anyone’s right to free speech.”

Given the previous quiz question that maintains, “A steady onslaught of requests for sex can be considered sexual coercion,” it is unclear how “Maintaining a respectful educational environment should not affect anyone’s right to free speech.”

Brewster told MRCTV that Thomson Reuters will be updating its course to also reflect newly-released statistics produced by the Association of American Universities regarding the rate of “sexual assault or unwanted kissing and touching.”