NBC Continues To Push a False Narrative, Saying Phillips Was 'Taunted By Students'

Even after recently released video came out vindicating the boys from Covington Catholic High School, NBC continues to claim that the students were taunting Native American elder Nathan Phillips during a protest caught on camera Friday.

Today on Twitter, the news outlet posted a story along with a quote from Phillips and context that's been long proven false, stating, “‘They were brought up to believe I’m less than human,’ said Nathan Phillips, the Native American leader taunted by students at the Indigenous Peoples March in Washington Friday.” 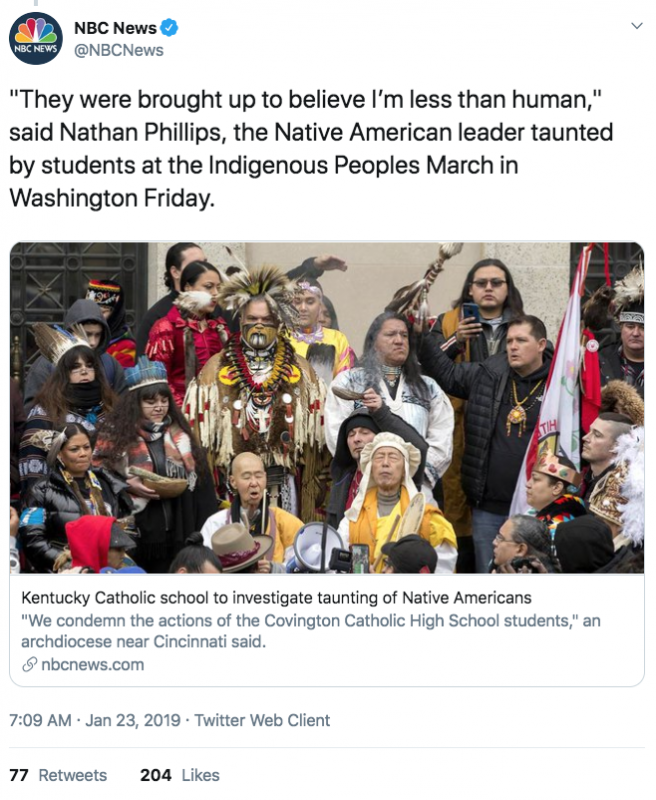 NBC put what Phillips said in quotes, but when they gave their opinion when they said he was “taunted” by students, they’re clearly avoiding reality. Luckily, folks on Twitter recognized the networks inability to report facts and called them out for it:

How in the world does Nathan Phillips know how they were brought up?? He wasn’t there. Was he? And who says he was taunted? Phillips? Then put that in quotes. Otherwise it looks like it’s NBC’s Opinion. And that would be BAD journalism.

Haven't learned a thing, have we NBC?

And Phillips knows this how, exactly?

He wasn’t taunted, he’s a actor with agenda no one cared about them or the Israelites, but wow kids and a MAGA hat boom now it’s a story

So kids in town for the March for Life were brought up to believe Phillips is less than human.

Original reports from various media outlets reported that “the Covington Kids” surrounded Phillips and other Native Americans as they performed a “sacred” song, but longer versions of cell phone video refuted that claim.

As of now, the media continues to push their false narrative — Boys wearing MAGA hats are racist bigots who cause chaos and don’t have good parents raising them at home — and they don’t look to be letting up anytime soon.

Look, when a smirk can be considered racism, and students expressing school spirit is considered "taunting," you know you’re living in pretty precarious times. Overly offended people and the biased media have turned this situation into something it is not.