Ugh, celebrities. Possibly even worse than celebrities are their family members that piggyback off of their relative’s fame to the point that they think what the ignorant things they have to say carries any meaning. Spoiler: It doesn’t.

“Singer-songwriter” Noah Cyrus, who apparently is the younger the sister of pop singer Miley Cyrus (I had no idea she even had a sister), took a racist shot at conservative commentator Candace Owens on her Instagram story.

Owens had criticized singer Harry Styles for wearing a dress in Vogue recently, saying that we need to “bring back manly men.”

In response Cyrus referred to Owens and anyone else criticizing Styles for dressing like a woman as “nappy ass heauxz.”

Nothing to see here, just @noahcyrus “defending” @Harry_Styles against criticism by @RealCandaceO - by calling Candace a “nappy ass hoe.”

There truly is no racist like a White Liberal racist. pic.twitter.com/NGTWbyo3Ha

Owens responded by asking “woke liberals” on Twitter “how @noahcyrus calling me a ‘nappy ass hoe’ is not racist.”

Any one of woke liberals care to explain to me how @noahcyrus calling me a “nappy ass hoe” is not racist?
I’m all ears.
You guys love cancel culture. @MileyCyrus come get your sister! https://t.co/N6Ej7UICPW

Cyrus made the obligatory celebrity apology after being called out for her racism. 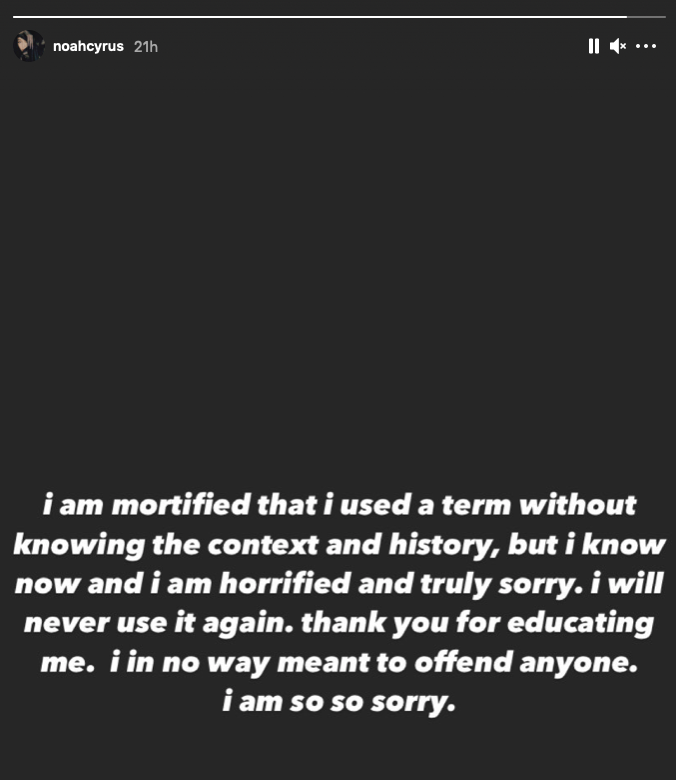 If Cyrus actually learned her lesson, great. People can make mistakes. But, it’s doubtful considering the track records of most celebrities empty apologies.