President Trump should really add another title to his repertoire — “Twitter-Troll-In-Chief.” All the president has to do is tweet out one sentence, and all you can sit back, grab some popcorn and watch the Left get triggered.

In case you haven’t heard, it was Rep. Maxine Waters’ (D-Calif.) 80th birthday on Wednesday (crickets). Oh, you didn’t care either? Well, the president cared, damn it! So, you should too!

Trump cared so much he sent out this tweet:

But, someone else tweeted birthday congratulations to Waters as well. It’s none other than Rep. Nancy Pelosi (D-Calif.)! While Pelosi gave it her best shot, her trash talk game needs a little work. 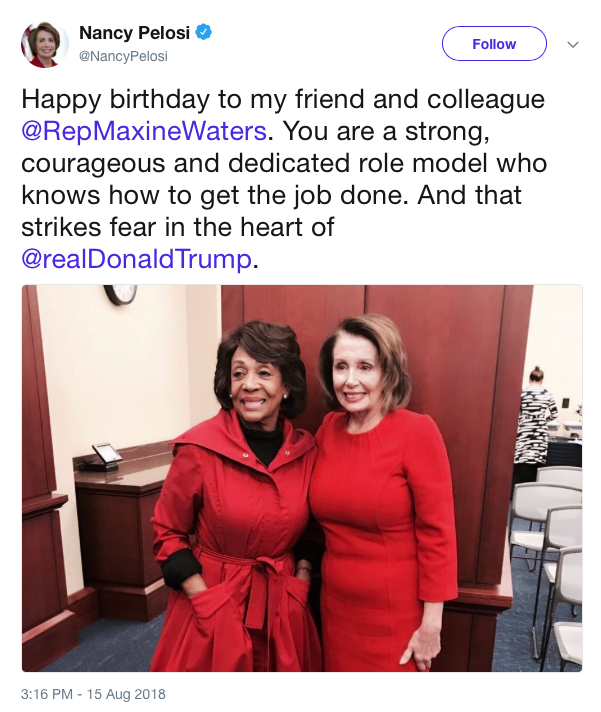 Ooooo! Sick burn, Nancy! Not! She does know that she has 280 characters to put together an actual sentence, right? And if Waters is such a good friend of Pelosi's, why did Trump tweet birthday wishes to Waters hours before Pelosi? For shame, Nancy!

The only person that Maxine Waters strikes fear in the heart of is the people at Citizens for Responsibility and Ethics in Washington (CREW), because they annually have to go over how corrupt she’s been every year. That’s a lot of work considering Waters has been named “the most corrupt member of Congress” four times!

The only thing Waters should’ve received for her birthday are markers and placards, because she does more protesting against the president than actual legislating. You know, the thing she was actually elected to do?