If there was a Hall of Fame for hypocrites, world renown ice cream mavens Ben & Jerry would have to have their own wing built just for them.

Founders Ben Cohen and Jerry Greenfield penned an impassioned plea to members of MoveOn.org's mailing list on Sunday, asking members to use a red stamp on every measure of U.S. paper currency. The stamp reads, “RESIST BIG MONEY IN POLITICS.”

What did they, and MoveOn.org, do to try and stop “big money” in politics? They asked for members to donate “$15 or more” in order receive the stamp. So, they’re using capitalism to promote socialism. Sounds about right.

According to the email:

More money than ever is flooding into politics in the age of Donald Trump. While Trump distracts us with his latest scandals and tweets, the richest 1%, corporations, and their lobbyists are more influential than ever behind the scenes in getting their way on the issues and buying our elections—while pushing the rest of us to the sidelines.

The rest of us? Who is this “us” you speak of, Ben and Jerry?

According to a 2013 Economic Policy Institute report, the average annual income of the top one percent in the state of Vermont, home of the Ben & Jerry's factory, is $735,607.

According to the New York Times, Cohen and Greenfield sold their company (of which they remain on the board) to global distributor Unilever for $326 million back in 2000, so for them to come down on the top one percent of people anywhere in the world is a little hypocritical. It becomes even more hypocritical when taking into account that they donated money to Democratic Socialist Bernie Sanders' 2016 presidential campaign.

Ben and Jerry’s parent company, Unilever, gave at least $1,000 to 13 different Democratic candidates during the 2016 election season, according to OpenSecrets.org. They gave Sanders’ campaign $6,147, and Clinton’s campaign received $18,673.

But that’s not all.

Here’s a screenshot of the email in question: 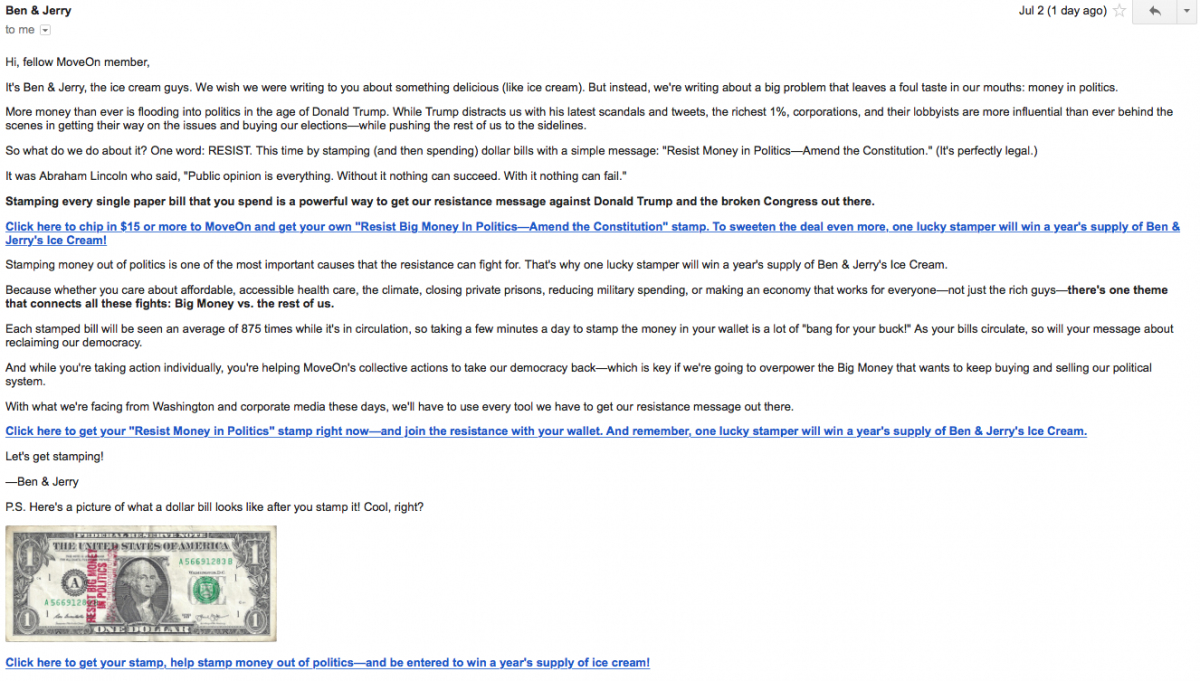