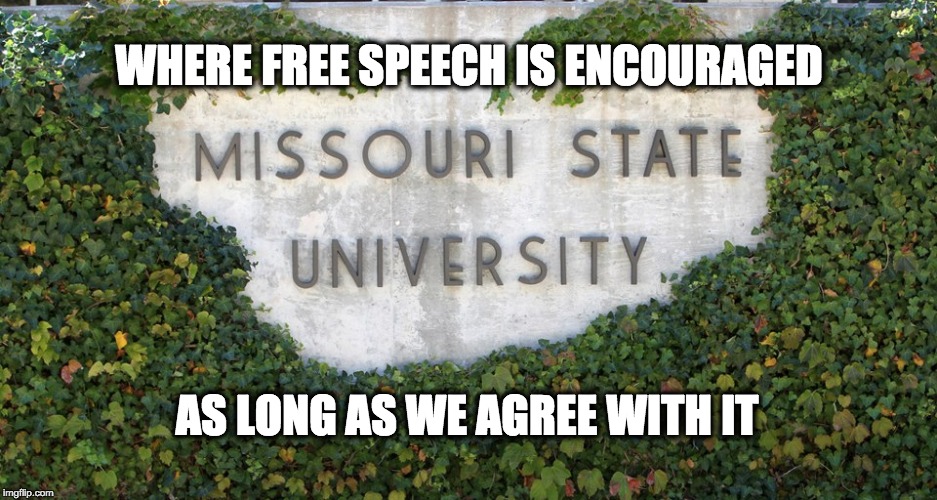 Andrew Cash is suing Missouri State University (MSU), a public university located in Springfield, Missouri, because it kicked him out of its master's program in counseling. Cash claims that he was thrown out because he said that his religious beliefs would prevent him from counseling a gay couple (although he said he would counsel gay individuals).

According to the brief, the graduate counseling program requires requires 600 hours of clinical counseling, 240 of them face-to-face. To meet this requirement, Andrew Cash interned at the Springfield Marriage and Family Institute (SFMI), a Christian-based organization. He claims that MSU knew it was a Christian based program, since at least one other student in the M.S. in Counseling program had previously completed an internship at the Institute and Cash's internship was approved by MSU before he started working there.

As part of a class project, on April 11, 2011, Cash arranged for W.K. Boyce, his supervisor at SFMI, to explain about the Christian relationship counseling to the class.

Boyce explained SMFI’s Christian-based approach to counseling, and indicated that the Christian value foundation of the counseling practice was well known to anyone who came to seek counseling. A question was asked if SMFI prays with clients. Referencing an openly displayed Bible Boyce said that he would pray with a client upon request. A student asked Boyce if SMFI counsels gay couples. Boyce said that he would counsel gay persons as individuals, but not as couples, because of his religious beliefs, but would refer the couple for counseling to other counselors he knew who did not share his religious views.

A week later, Mr. Cash received an email from the counseling school's internship coordinator, Dr. Perryman, asking him to meet with her as soon as possible about his internship. Perryman told W.K. Boyce at SMFI that Cash was no longer allowed to intern at SFMI, and that the Institute was removed from the department's list of approved internship sites until certain “ethical concerns” had been addressed.

When Plaintiff [Cash] met with Dr. Perryman she questioned him closely about SMFI’s and his own views toward counseling gay persons. She asked him whether, if a gay couple came to him for counseling for their relationship, would he counsel them? Plaintiff said that he would counsel them individually on issues related to depression, anxiety, etc., but not as a couple, but that he would refer them elsewhere. Plaintiff stated that his approach to counseling is centered on his core beliefs, values and Christian worldview and these would not be congruent with the likely values and needs of a gay couple, who, for these reasons, would be best served by a counselor sharing their core value system and core beliefs. Dr. Perryman then told Plaintiff that he could not hold these views, which she deemed to be unethical, and which, she asserted, contradicted the American Counseling Association's code of ethics as discriminatory toward gay persons.  Dr. Perryman, who was also Plaintiff’s Student Advisor, directed Plaintiff not to return to his internship at SMFI, the internship that she had approved just three months before.

Things went downhill from there. The school forced Mr. Cash to accept a remediation plan, was seemingly designed to reeducate him to reject the tenets of his Christian faith. The plan required him to attend 10 sessions of counseling to address his counter-transference issues, to audit two courses he had already passed (with an 'A' grade), to participate in a few supervised sessions of student teaching, and then to complete a self-assessment, which would be reviewed by the committee. Only then would the faculty committee decide if he could re-enter the clinical internship program.

And as a coup de grâce, the faculty committee announced that the face-to-face hours he had completed during his  SMFI internship (51 of the required 240 clinical hours) were no longer valid, therefore, he had to start all over. He appealed their decision all the way up the MSU management line, but was denied at each level all the way up to, and including, the Provost.

During this process he continued to take the required classes and, according to the brief, had an impressive 3.81 GPA and - except for the fact that he was an observant Christian - had a clean record. Apparently, that wasn't good enough because, in November of 2014, Mr. Cash was summoned into a meeting with the head of the counseling department and the Dean of the College of Education and was told he was being tossed out of the program.

Traditionally, universities have been places for free exchange of ideas and values, both religious and secular. Unfortunately, Missouri State University departed from its mission by denying educational opportunity to Mr. Cash simply because he expressed, in an academic setting, sincerely-held religious beliefs which his advisor deemed hostile to her own and therefore unacceptable.  An educator should not permit her own ideology and agenda to ruin the educational opportunities of her students.  We feel the responsibility, on Mr. Cash's behalf, to try to correct this."​

This is not a suit trying to re-litigate the gay marriage issue. At the heart of this lawsuit is the question of whether people have to subordinate their religious views in order to get a degree.  As a public college, MSU must adhere to the U.S.Constitution, and the First Amendment says very clearly the answer is no.