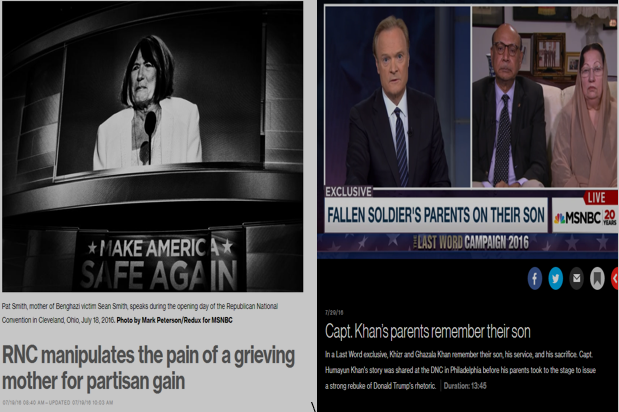 Bias in the media is nothing new, but MSNBC went above and beyond with their coverage of speeches by grieving parents at the Republican and Democratic National Conventions.

Take Pat Smith, the mother of Benghazi victim Sean Smith, who gave a speech against Hillary at the RNC. The headline from MSNBC reads: “RNC Manipulates the Pain of Grieving Mother for Partisan Gain.” The article, by Rachel Maddow producer Steve Benen, describes the scene as “a spectacle so offensive, it was hard to even comprehend,” and insinuates that the “rabid” Republican base needed some “red meat to chew on.”

In all honesty, the only things that could be considered at all "radical" about Smith’s speech are her personal animosity toward Clinton and her suspicion of Clinton’s original narrative that an online video caused the attack. As the mother of a victim killed in a sensitive situation under Clinton’s State Department, the animosity seems pretty normal. The question of whether Clinton was trying to cover her tracks in the situation by blaming a video is also at least partially justified. From reading MSNBC however, one would think Smith had accused Clinton of being a lizard-creature overlord.

Conversely, take Khizr Khan, the Muslim father of a slain U.S. soldier, who spoke out against Donald Trump at the DNC. This time, the MSNBC headlines were significantly more favorable, such as: “Capt. Khan’s parents Remember their Son” and “Khan Family: We Felt Compelled to Speak Up.”

MSNBC treated this family with the utmost courtesy and sympathy, almost seeming as though they are manipulating the pain of grieving parents for partisan gain.

But lest anyone mistakenly suppose this indicates bias, MSNBC's Steve Benen attempts to clarify this in the article “A Tale of Two Grieving Parents." Kind of.

Benen first slams Pat Smith (again) for her “deeply unfortunate display” in which she “used her time to repeat discredited conspiracy theories," adding that, “Smith’s remarks were ugly and wrong, and it wasn’t appropriate for Republican organizers to exploit her grief to peddle conspiratorial nonsense.”

He then praises Khan’s speech as “One of the most powerful moments of either party gathering.”

Finally, Benen states that if people think this interpretation indicates any sort of slant, they are simply ignorant, alleging that “[t]he difference should be obvious.”

Sure, the difference is obvious: one speaker is Democrat, the other is Republican. Other than that, they’re both pretty standard convention fare, slinging accusations, talking about the American dream, etc.

But if you’re undecided and need someone to tell you what to think, Steve Benen and MSNBC have you covered.