MSNBC Panel: Hillary 'Didn't Lose,' She Had a 'Successful Failure' 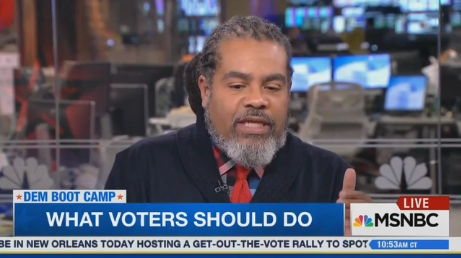 It appears some Hillary Clinton supporters still haven’t accepted that she lost the election. Here's an example: Sirius XM radio host Mark Thompson joined an MSNBC panel Saturday to provide liberal spin on the results of the presidential race.

“We talked about sore winners in the earlier segment. We really didn’t lose. This was sort of a successful failure,” he said of Clinton's loss.

So much for the low turn – Jim just said, it’s 1 percent off. She is close to Barack Obama’s 2012 total. And nobody thought that was going to happen, either. So, so much for, as you mentioned, the economic anxiety, things are not as bad, people upset about the economy. The economy is doing well nine years of private sector job growth, unemployment rate going down. So I think we as voters on our side, whether we voted third party or not. And it’s no secret, I do have affinity for third party movements, need to act if we actually did win some things. The majority of Americans voted a Democratic way. Voted for Hillary Clinton. Voted for Democratic senators, voted for Democratic House of Representatives.

Keep telling yourself that, Mark. Whatever makes you happy!