Uber-left activist organization MoveOn.org just won’t pay attention to its own name and literally “move on.”

In an email obtained by MRCTV, the "Resistance"-oriented group sent out an email Thursday afternoon calling for the impeachment of President Donald Trump.

Today, we're doing something we've never done before in the history of MoveOn: We're calling for the impeachment of the president of the United States.

The MoveOn email stated that they have held off making this declaration because they “didn’t want to jump to any conclusions.”

MoveOn’s impassioned plea in calling for Trump’s impeachment came within a couple of hours after former FBI Director James Comey’s testimony in front of the Senate Intelligence Committee Thursday.

MoveOn invoked the Founding Fathers in their call for Trump’s impeachment.

“But former FBI Director James Comey's testimony today confirmed that Trump used his power as president to pressure the FBI to drop the investigation into his team's ties to Russia,” the email stated. “—and that's exactly the kind of abuse that our nation's founders meant by "high crimes and misdemeanors.”

Not to be outdone by their own hubris, MoveOn also asked for money from their lemmings in the email, adding:

The drive to impeachment won't be quick or easy. We'll need to sustain a big, powerful effort, so we're asking you: Will [you] chip in $5 a month to press for the full truth about and accountability for Donald Trump?

Here’s a question. How will giving money to MoveOn.org bring about the “full truth” when it comes to a possible Trump investigation?

Taxpayers already pay the salaries of the people who would even have the capability of bringing to light whatever “full truth” they’re talking about.

The email ends by saying that actions like this are “a new phase of the resistance.”

The American people have tried to resist listening to the repeated BS coming from the far Left, and now, it’s time to expose all their nefarious plans.

Here is a screenshot of the email in question: 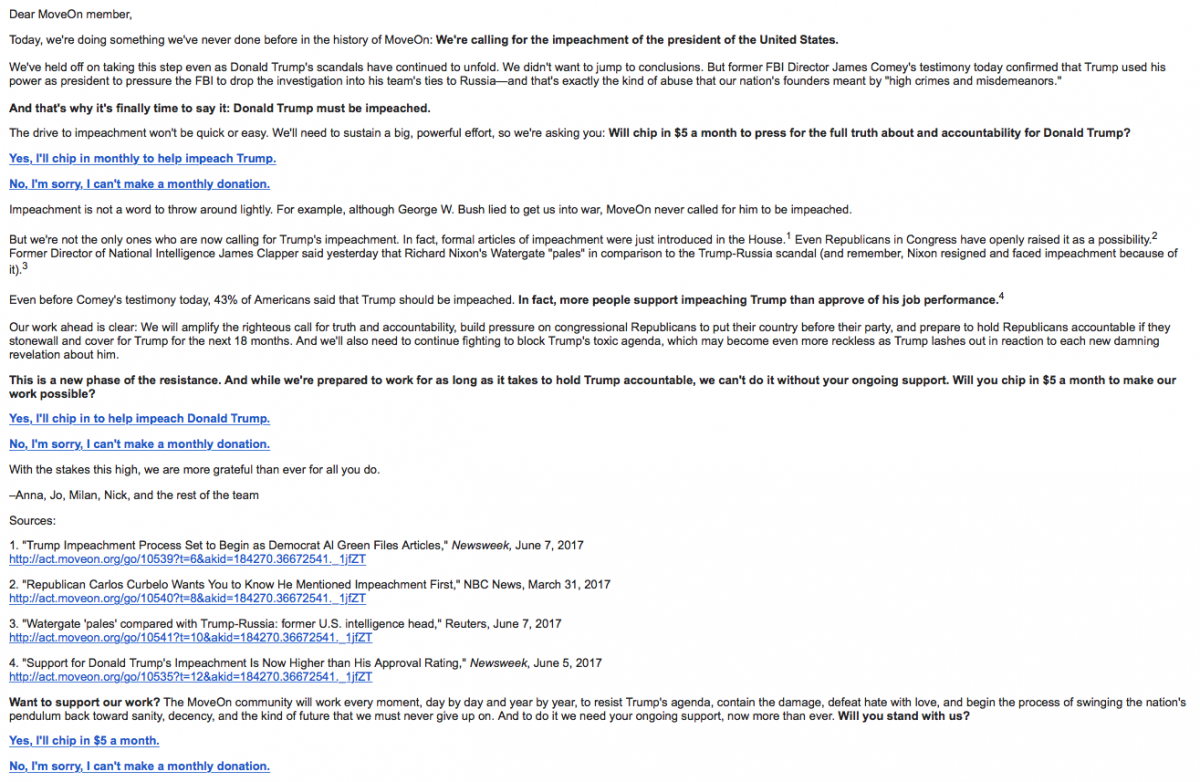