The 'Most Transparent Administration Ever' Is Blocking FOIA Requests 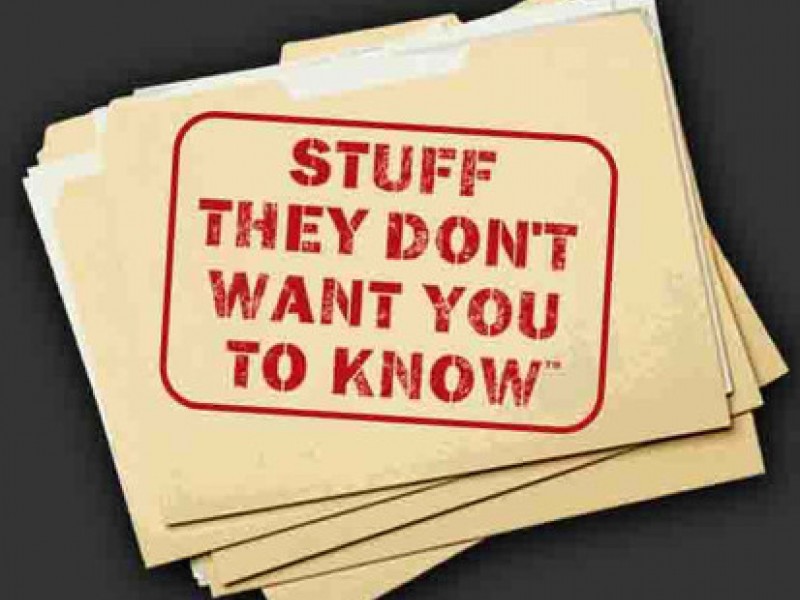 Not only was government transparency a campaign promise of Barack Obama when he ran for office in 2008, but directing his Attorney General to make easier to obtain documents via the Freedom of Information Act (FIOA) was one of his first acts as POTUS. Despite that promise and public action, according to watchdog group "Cause of Action," the White House is actually obstructing FIOA requests.

On January 21, 2009, his first full day in office, the President issued a memorandum to all the executive departments and agencies, emphasizing that the FOIA reflects a "profound national commitment to ensuring an open Government." In the memo he told the Attorney General to take action:

I direct the Attorney General to issue new guidelines governing the FOIA to the heads of executive departments and agencies, reaffirming the commitment to accountability and transparency, and to publish such guidelines in the Federal Register. In doing so, the Attorney General should review FOIA reports produced by the agencies under Executive Order 13392 of December 14, 2005. I also direct the Director of the Office of Management and Budget to update guidance to the agencies to increase and improve information dissemination to the public, including through the use of new technologies, and to publish such guidance in the Federal Register.

In practice that's not what's happening. According to "Cause of Action," the White House is not only stymieing FIOA requests, but also hiding the paperwork relating to their obstructions.

Cause of Action  a government accountability organization, sued 10 cabinet agencies, the Office of Management and Budget, and the Internal Revenue Service today for refusing to disclose communications concerning documents the agencies shared with the White House. The records would reveal whether and how the White House politicizes records requests sent to federal agencies.

“Accountable and transparent government does not involve instructing agencies to send politically sensitive records to the White House for review. The bureaucracy has violated the law by stonewalling the public’s access to documents for political reasons. Cause of Action’s own investigation reveals that the White House is actually demanding access from agencies to Freedom of Information Act (FOIA) requests and Congressional document requests, as well as the documents subject to those requests, in a manner that may obstruct congressional oversight and violate the spirit of FOIA,” stated Dan Epstein, Cause of Action’s executive director.

Three months later in a much less public manner White House Counsel Gregory Craig reminded all Obama administration agencies that, before they comply with FIOA and other similar requests, they need to consult with the Counsel's office. This has served to slow down requests (see below--note phone numbers have been redacted). 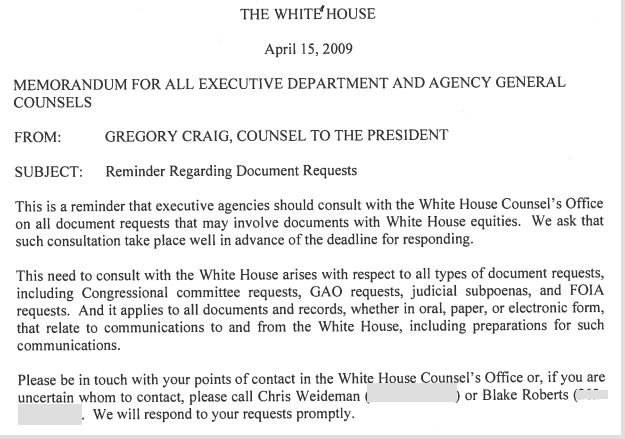 A recent example of that obstruction involves the Department of Energy (DOE):

White House officials intervened in public records requests made to the Department of Energy, but federal investigators don’t know how many because required records weren’t kept, according to a new report from the DoE’s Office of Inspector General.

Federal investigators found the DoE sent four of the 55 public records requests they analyzed to the White House for review, but the corresponding case files documenting actions taken on those requests were “incomplete,” the inspector general said.

“Without full retention of case documentation, particularly documents showing changes to redactions or exemptions used, it was impossible to know with certainty what changes were made when the documents went outside the department for review,” the inspector general said. “Further, the lack of case documents potentially makes it much more difficult to defend FOIA appeals.”

The video below is a reminder of some of the times this president has promised transparency, but when it comes to FIOA requests that promise has proven to be empty.