Morning Joe Calls Out Clinton/Media for Hypocrisy on Election Results 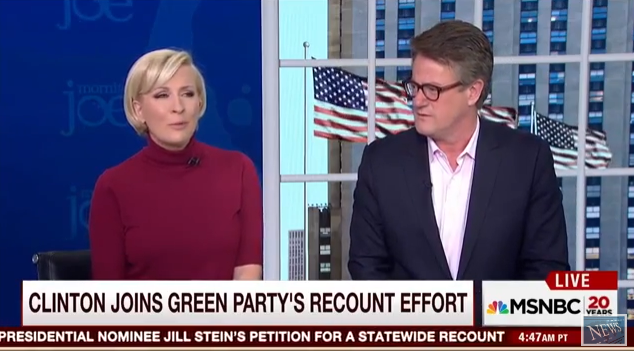 Even MSNBC’s "Morning Joe" recognizes the clear hypocrisy regarding Hillary Clinton’s recount efforts. On Monday’s episode, the show called out various journalists for their statements condemning Donald Trump after he said he would reserve his legal right to "contest or file a legal challenge" in the case of a questionable election result.

Hosts Joe Scarborough and Mika Brzezinski displayed quotes from columnists and politicians who had criticized Trump’s words - but, who are now silent regarding Clinton’s recount effort:

“The refusal to accept this bedrock principle of democracy was shocking…” – Dana Milbank, The Washington Post

“A concession isn’t just an exercise in graciousness. It is an act of respect for the will of the American people…” – Sen. John McCain (R) Arizona

“His refusal to accept the results of this election disqualifies him automatically from any office in the United States.” – Andrew Sullivan, New York Magazine

“He really has no appreciation for our history, which most of the world looks at with great admiration, as opposed to some banana republic.” – William Daley, Fmr. White House Chief of Staff

Hillary Clinton said of Trump’s waiting for the outcome, “He refused to say that he would respect the results of this election. Now, make no mistake, by doing that he is threatening our democracy.”

“So he’s threatening our democracy if he does exactly what she’s doing…” Scarborough quipped. “This is what people do in elections. Hillary’s doing what people do. But when Trump even suggested it – well democracy is at risk for saying, ‘I’m going to leave open my options.’”

“By the way, this is why you’re all going out of business,” Scarborough added as he held up a stack of newspapers. “You still don’t get it. You’re still being hypocritical…”