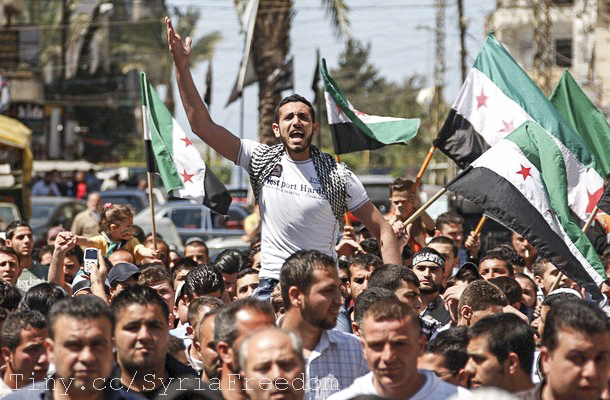 An interview with two Syrian activists - both whom requested that they remain anonymous to protect their safety - reveals how the chaos and suffering created by ISIS has led advocates for peace, freedom, and democracy to call into question their own humanity.

The first activist, a Syrian in his 30s, reportedly made his name in the peaceful protests of 2011 and “hadn’t committed an act of violence in his life."

He discussed how the Islamic State of Iraq and Syria had come to dominate the airwaves, using savage beheadings of Western journalists and aid workers to give voice to their delusional cause. When it comess down to capturing the world's attention, the activist expressed that the Syrian moderate movement’s peaceful tactics and demonstrations simply cannot compete.

“We’re at a stage in Syria where our principles aren’t going to help us,” he said.

Feeling at a loss, admittedly frustrated and desperate for progress in Syria, the prominent activist and some of his colleagues hatched out a plan, “part revenge and part an attempt to reassert their voice.”

According to their plan, “They would go to Syria and buy an ISIS prisoner from another rebel group. Then the activist would behead the man on video and release it to the world.”

The man conceded, however, that he wouldn’t be able to commit such an atrocious crime. In that case, he’d opt to shoot the ISIS fighter in the back of the head.

The group had already made the necessary preparations to carry out the plan.

“The prisoner was already selected: a foreign jihadi said to embody the worst of ISIS’s blind extremism. The fee that the activist would pay to buy him, of thousands of dollars, was in hand. The activist and his colleagues would cross the border the next day.”

Even though he hadn’t agreed their methods in the past, the Syrian activist acknowledged that ISIS has been “very effective” at garnering attention.

“He hoped the video would send a message to both ISIS and the West — that Syria’s moderates were still there and resisting — even if it meant adopting the brutal tactics employed by the extremists.”

He also considered how going against his core beliefs and that of the moderate movement could send the wrong message.

“It’s saying: Look at us. Look at what we’re doing. We know it’s [expletive] up. But we’re in a conflict where no one is paying attention to us.”

He continued, “We’re sort of lost. As an activist, I have no idea what the [expletive] to do.”

The second activist, a colleague, young and well-respected, shared many of the same thoughts:

“Oh, man. This [expletive] is driving us crazy. It makes it hard for you to determine right from wrong. I mean – you still want to be a very cool person, a moderate, someone who is passionate about his cause. But at the same time, you feel like there is nothing you can do to change this moment, to change the revolution.”

“This is a desperation move,” he said.

According to BuzzFeed News, the group of activists traveled into Syria as planned and purchased the ISIS prisoner. Despite being tied down to a metal chair in a concrete room, faced with the guns his captors were holding, the man didn’t seem frightened.

As the activists set up their camera equipment to film the planned execution, the captive asked, “Will you put me on TV?”

While interrogating the ISIS fighter, listening to the man's extremist views and remembering the evil acts committed by his fellow jihadists, the activist found himself believing that he could actually kill this man. Yet, as justified as he may have felt, his morality took over.

“I couldn’t hurt him,” the activist said.

The group of activists released the ISIS fighter. They drove him toward the Turkish border, gave him some money, and let him go "on the condition that he leave Syria and never return."

Reflecting on why he couldn’t carry out the plan, the activist said, “I feel that the world will forget us and forget what we stood for.”

In the end, we have to have faith in the narrative that good always triumphs over evil, right?