Missouri state Senator Maria Chappelle-Nadal is a prime example of why we can’t have nice things.

Chappelle-Nadal is continuing her practice of hate and division, despite receiving loads of backlash after she commented on social media Thursday that President Trump should be assassinated. (Like this new social media faux pax, that comment has since been deleted.)

This time, Chappelle-Nadal was caught retweeting a picture of the Auschwitz concentration camp, along with the suggestion that Missouri Gov. Eric Greitens “should know where the Trump Train goes."

Here’s the now-deleted retweet, which was captured and tweeted out by the Daily Caller’s Peter Hasson: 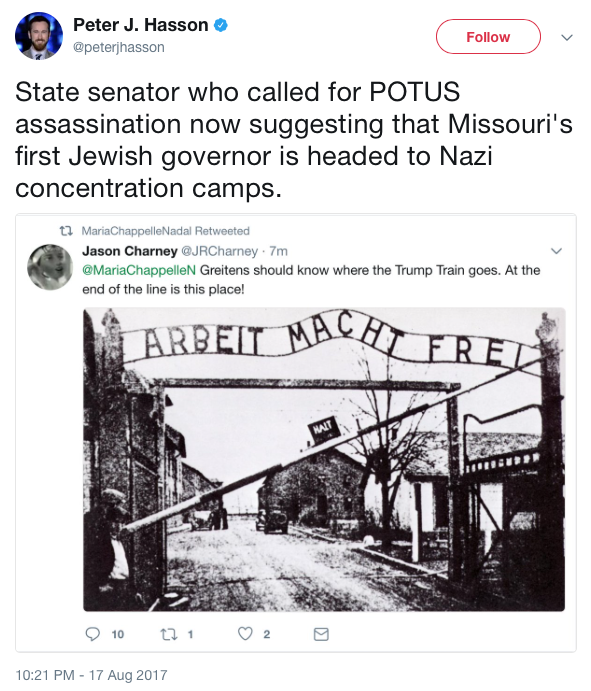 If there are two things radical liberals like Chappelle-Nadal are good at, it’s dividing people and repeating the same outlandish fabrications of the truth until the sheeple believe them.

While Chappelle-Nadal has received numerous calls for her resignation over her calls to assassinate Trump, she's refusing to resign, and is even promoting a campaign to support herself. Yes, that is a sentence that was just written.

Here is Chappelle-Nadal’s tweet of the campaign to save herself:

If you #standwithmaria, then all you are doing is espousing hate -- the same hate that the Left wants you to think they're so bravely standing against.