Politicians crave attention. They long for it. That’s part of the reason they ran for office in the first place.

One Missouri state senator likes to say crazy things all the time — not just because she thinks it makes her look “woke” — but because she loves the attention she receives as a result of institution-worthy madness.

State Sen. Maria Chappelle-Nadal (D-14th District) is no stranger to controversy when it comes to social media posts. But, her latest controversial tweet has non-racist people scratching their heads.

Chappelle-Nadal wants the U.S. government to give black people money for something that never directly affected any those living today. Anyone worth anything already knows that slavery was then  - and is still wrong. People all around the world — of every culture — have been enslaved at one point in history. That doesn’t mean that future generations deserve compensation.

Black people owned slaves as well during that era. Should the government have to pay reparations on their behalf too?

As far as anyone can tell, there are no longer any slave owners in the U.S. White people don’t endorse slavery, and slavery hasn’t legally been allowed in this country for nearly 153 years.

We shouldn’t take what Chappelle-Nadal says too seriously, because she is the same woman who hoped for President Trump’s assassination last year. Chappelle-Nadal also retweeted a tweet in 2017 claiming that Trump would put people — including half-Jewish Governor Eric Greitens — into concentration camps.

Despite calls for her resignation, Chappelle-Nadal stayed in office, but was removed from all state senate committees.

The Twitterverse called out Chappelle-Nadal on her BS: 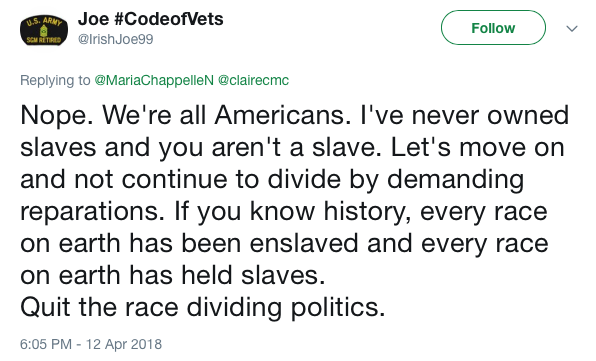 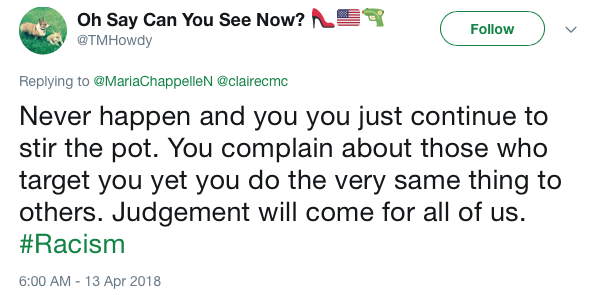 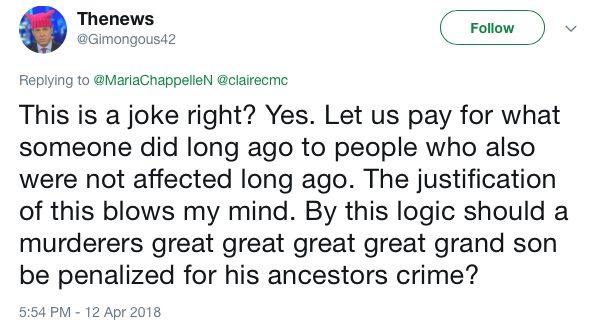 Maybe if radical Leftists like Chappelle-Nadal focused a little more on their constituents and a little less on Trump and/or perceived racism, they might actually get something done. Just a thought.