Sarah Idan may have been dubbed Miss Iraq, but don’t expect to see her in the Iraqi version of Miss Congeniality anytime soon.

Fox News reported that Idan and her family have been forced to flee their homeland after receiving death threats from people angered by the pageant contestant’s decision to post an Instagram selfie with Miss Israel, Adar Gandelsman. 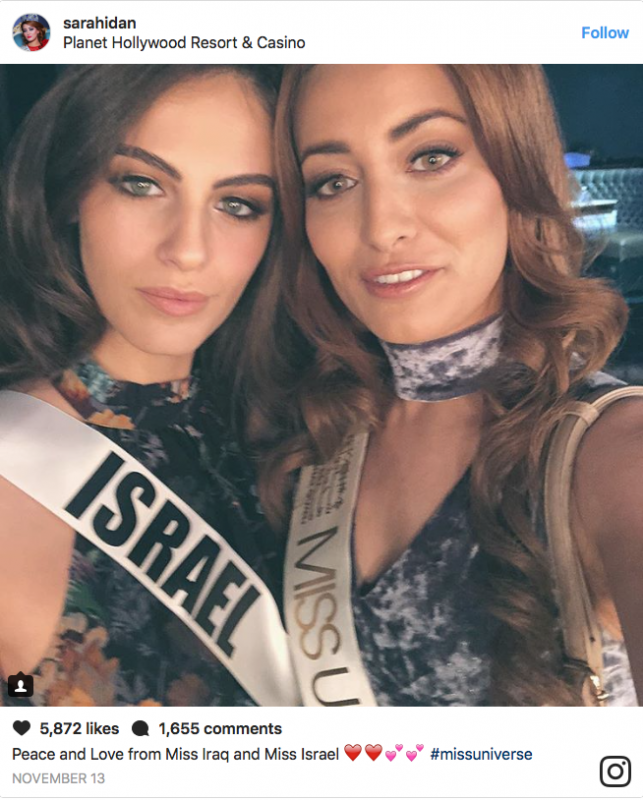 Idan also posted an image of her modeling a bikini, which caused additional outrage, but has since been taken down from her Instagram page.

Despite the perceived threat, Idan stands by her decision to pose with Miss Israel.

The Times of Israel issued an English translation of Idan’s Arabic response to the outrage on Instagram.

“I want to stress that the purpose of the picture was only to express hope and desire for peace between the two countries,” Idan wrote. “[The picture] does not signal support for the government of Israel and does not mean I agree or accept its policies in the Arab homeland.”

Idan also apologized to those who saw her picture as harmful to the Palestinian cause.

The Times of Israel reported that the two countries, Iraq and Israel, are considered enemies.