The Fresno Grizzlies, a Class AAA minor league baseball affiliate of the Washington Nationals, apologized on their Twitter page late Monday evening for showing a Memorial Day tribute video that grouped Ocasio-Cortez in with other “enemies of freedom.”

The words in the video were that of late former president Ronald Reagan, which he gave during his first inaugural address in 1981. Reagan’s speech was chopped up and positioned in a manner that paid tribute to America’s fallen soldiers, fitting for Memorial Day.

Unfortunately, whomever edited the video put in an image of Ocasio-Cortez in between Jong-un and Castro, ruining the tribute.

Here’s the video, with the image of Ocasio-Cortez coming up at the 3:06 mark:

As a result of their snafu, the Grizzlies issued a public apology to their Twitter page: 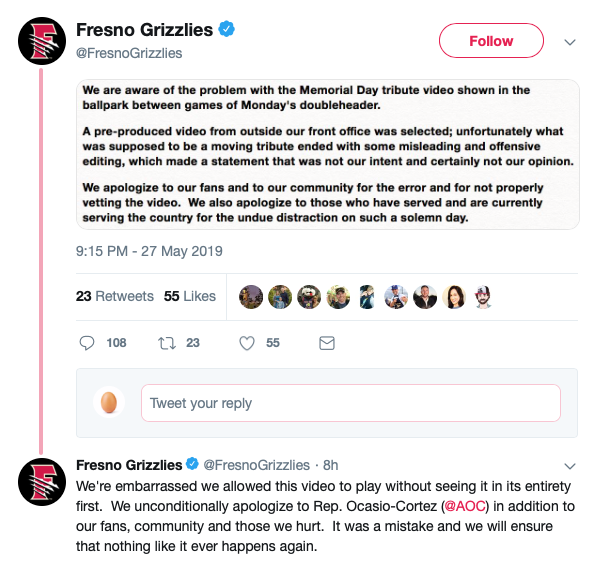 One could say that the Grizzlies shouldn't have had to apologize considering so many forms of entertainment take shots at President Donald Trump, calling him and his supporters Nazis without really understanding the gravity of calling someone something like that.

On the other hand, it’s beyond me why they would ruin a Memorial Day tribute, with such moving words by Reagan, with an image of someone who — until recently — had no idea what a garbage disposal was. I'm just not sure the Grizzlies mistake was worthy of an apology. You showed the video in the specific way you showed it. Own it.

For a transcript of Reagan’s words from the otherwise moving video, read below:

If we look to the answer as to why for so many years we achieved so much, prospered as no other people on Earth, it was because here in this land we unleashed the energy and individual genius of man to a greater extent than has ever been done before. Freedom and the dignity of the individual have been more available and assured here than in any other place on Earth. The price for this freedom at times has been high, but we have never been unwilling to pay that price[…]

Those who say that we're in a time when there are not heroes, they just don't know where to look[…]

…the sloping hills of Arlington National Cemetery, with its row upon row of simple white markers bearing crosses or Stars of David. They add up to only a tiny fraction of the price that has been paid for our freedom.

Each one of those markers is a monument to the kind of hero I spoke of earlier. Their lives ended in places called Belleau Wood, The Argonne, Omaha Beach, Salerno, and halfway around the world on Guadalcanal, Tarawa, Pork Chop Hill, the Chosin Reservoir, and in a hundred rice paddies and jungles of a place called Vietnam.

Under one such marker lies a young man, Martin Treptow, who left his job in a small town barbershop in 1917 to go to France with the famed Rainbow Division. There, on the western front, he was killed trying to carry a message between battalions under heavy artillery fire.

We're told that on his body was found a diary. On the flyleaf under the heading, ``My Pledge,'' he had written these words: ``America must win this war. Therefore I will work, I will save, I will sacrifice, I will endure, I will fight cheerfully and do my utmost, as if the issue of the whole struggle depended on me alone.’’[…]

…we must realize that no arsenal or no weapon in the arsenals of the world is so formidable as the will and moral courage of free men and women. It is a weapon our adversaries in today's world do not have. It is a weapon that we as Americans do have. Let that be understood by those who practice terrorism and prey upon their neighbors[…]

As for the enemies of freedom, those who are potential adversaries, they will be reminded that peace is the highest aspiration of the American people. We will negotiate for it, sacrifice for it; we will not surrender for it, now or ever[…]