Michelle Obama: 'A Candidate Is Not Going to Suddenly Change Once They’re in Office' 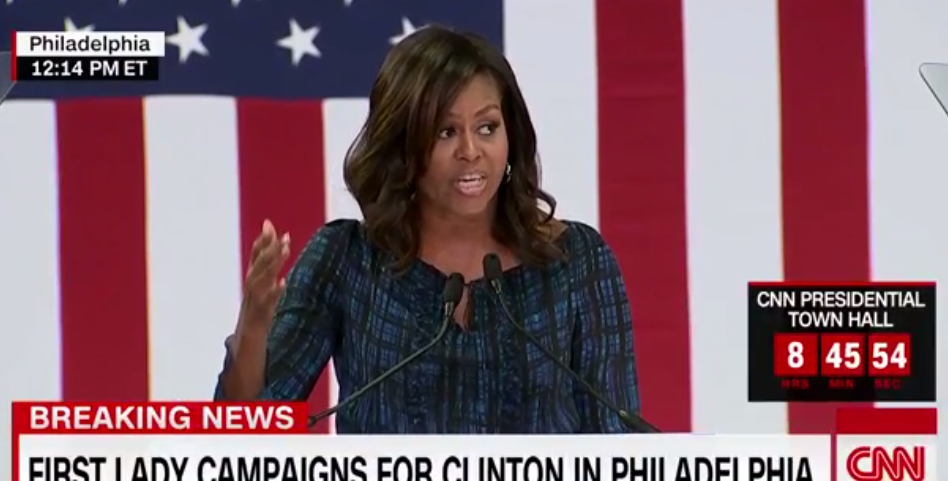 She criticized Clinton’s Republican rival Donald Trump throughout her remarks, calling him “erratic,” “threatening,” and “cruel” toward women, among other claims.

“U.S. presidential campaigns are very long -- nearly two and a half years, or half of one presidential term,” said the First Lady. “Just think about that.”

“So if a candidate is erratic and threatening; if a candidate traffics in prejudice, fears and lies on the campaign trail; if a candidate thinks that not paying taxes makes you smart, or that it’s good business when people lose their homes; if a candidate regularly and flippantly makes cruel and insulting comments about women, about how we look, how we act -- well, sadly, that’s who that candidate really is. That is the kind of President they will be,” said Mrs. Obama.

“And trust me, a candidate is not going to suddenly change once they’re in office -- just the opposite, in fact,” she added.

The First Lady argued that Clinton is the best candidate for the job because Trump lacks good judgment and has a volatile temperament.

“We need an adult in the White House,” she fired.

"We need an adult in the White House": Michelle Obama goes off on Donald Trump https://t.co/orde91v6Qd https://t.co/1ceWx49ida

Speaking at a campaign rally in Durham, N.H., Sanders and Clinton made an appeal to millennial voters, discussing their plan for tuition-free college.

adult in the White House