Documentarian and left-wing filmmaker Michael Moore took to Facebook this week to propose the repeal and replacement of the Second Amendment with a new 28th Amendment to the U.S. Constitution. 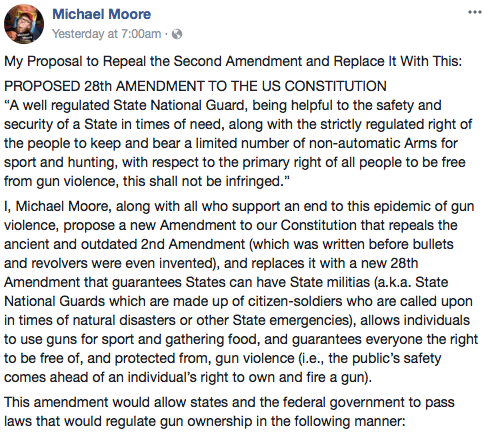 Moore's proposal also included specific details of his ideal 28th Amendment, including requirements for men to receive waivers to own guns from their wives, ex-partners, or any woman that had been previously engaged in a romantic relationship with said gun seeker.

This requirement also required gay men to seek out permission from their partners, as well. Moore writes:

• As over 90% of gun violence is committed by men, in order for a man to purchase a gun, he must first get a waiver from his current wife, plus his most recent ex-wife, or any woman with whom he is currently in a relationship (if he’s gay, he must get the waiver from his male spouse/partner). This law has greatly reduced most spousal/domestic gun murders in Canada.

• All automatic and semi-automatic guns are banned.

• No gun or clip can hold more than six bullets.

• To activate a gun for it to be used, the trigger must recognize the fingerprint of its registered owner. This will eliminate most crimes committed with a gun as 80% of these crimes are done with a stolen gun.

• One’s guns must be stored at a licensed gun club or government-regulated gun storage facility. Believing that having a gun in your home provides you with protection is an American myth. People who die from a home invasion make up a sad but minuscule .04% of all gun murders in the US. And over a third of them are killed by their own gun that the criminal has either stolen or wrestled from them.

• To own and operate a gun one must obtain a license (like one does to operate a car). To get a license you have to complete a gun training and safety course and pass a thorough background check.

• As nearly half of all gun deaths are suicides, mental health care must become a top national health priority and must be properly funded. And by making it more difficult to purchase a gun – and requiring its storage outside the home – easy access during a suicidal moment is denied.

• Current restrictions placed on the Centers for Disease Control (CDC), due to successful lobbying by the NRA, have prohibited them from studying the gun violence epidemic in the US. These rules need to be removed and the funding restored. Science will then be free to find out why we are ALONE among nations in killing each other at such a massive rate (hint: It’s not just the guns – it’s us as Americans).

"This is the sane approach that meets everyone's needs -- everyone, that is, except those of the serial killer, the mass murderer, the violent ex-husband, the disgruntled employee, or the disturbed and bullied teenager," Moore alleges, "We will never eliminate all murder; that’s been with us since Cain killed Abel. But we CAN join the community of enlightened nations where gun violence is that rare occurrence — as opposed to the daily tragedy we now suffer here in the United States of America. This can come to an end with the repeal of the 2nd Amendment and replacing it with the 28th Amendment."