Men In Skirts Is a 2018 Fashion Trend. Sorry About Your Eyes.

The New York Post explains that a plethora of skirt-clad men are showing up on runways across the world, launching the next step in “gender-neutral” fashion. And, while runway shows aren’t exactly the paradigm of everyday attire worn by most normal people (Exhibits A-M here), guys running around in yards of crimped chiffon are an especially disturbing sight.

In an era during which rules seem meant to be broken — and more and more people are calling for gender equality — it should surprise no one that the fashion world is the head cheerleader for change. Case in point: the Fall 2018 Menswear designers presenting a variety of skirts on their runways. 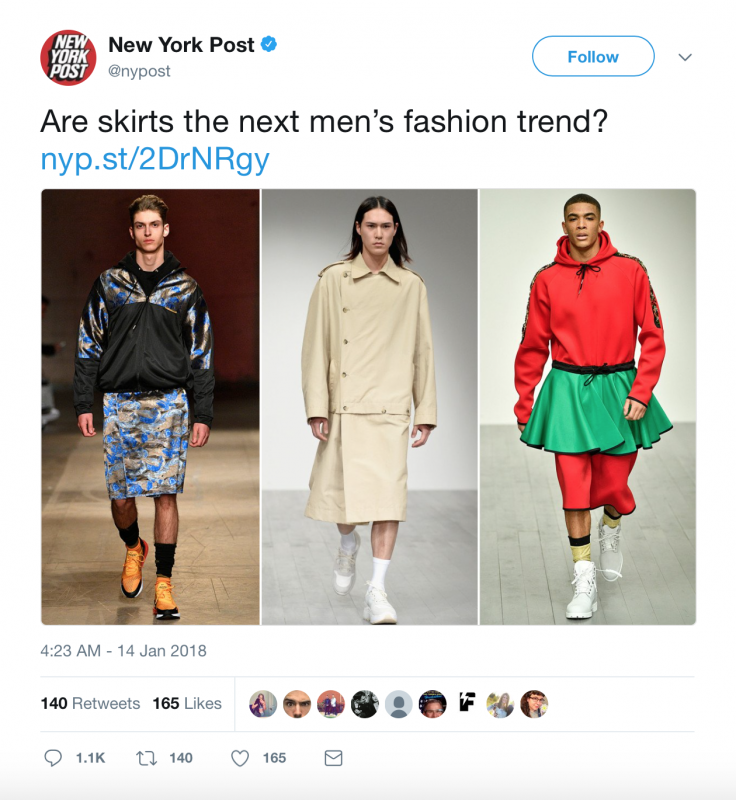 Please. Please, no. I’m begging you. I’ve already been involuntarily subjected to the image of Lena Dunham sitting naked on a toilet eating cake. The visual of a bunch of hairy-legged dudes running around in maxi dresses might just send me over the edge.

But that’s the direction we’re heading, it seems – into a brave new world in which men are shamed and bullied by their feminist overlords into self-castration, relegated to wearing pleated minis in some disturbing nod toward inclusivity and overall sexlessness. Never mind that it’s been proven – repeatedly, I might add – that women are much more like to gravitate toward butch guys with bulging biceps and about four pounds of grease under their fingernails than a wimp in skinny jeans who claims unicorns are his spirit animal. Forget the slim-cut suits – let’s start shoving male models into drop-waist florals and call it gender equality, instead.

That meteor everyone's always scared might hit us? It can go ahead now.