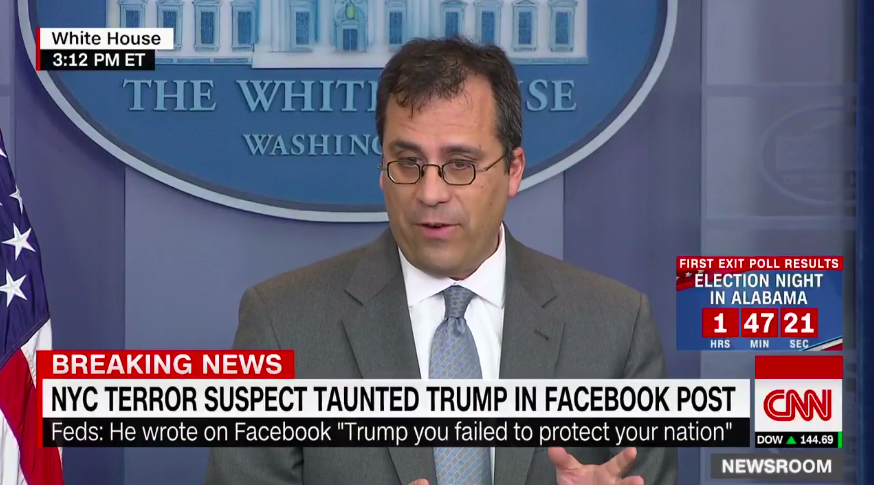 The media at the Tuesday White House press briefing pulled all the stops to get the Trump administration to say immigrants who enter the U.S. through chain migration are more likely to be terrorists.

This comes after the White House on Monday claimed that the New York City terrorist attack could have been avoided had Congress worked with President Trump on immigration reform – specifically reform having to do with chain migration, or how immigrants can enter the U.S. through sponsorship from non-nuclear family members already settled in the country.

Director of United States Citizenship and Immigration Services (USCIS) within the Department of Homeland Security (DHS) L. Francis Cissna explained to reporters at the briefing that the administration believes the current immigration system should be more selective.

“Because the categories that we have in family migration are so extensive, it’s not just nuclear family… You could sponsor a person like yesterday’s alleged terrorist at the extremity of that chain and then that person in turn can sponsor people and so on and so on indefinitely,” he said.

“Hundreds of thousands of people coming to this country based on these extended family migration categories,” Cissna continued. “What we need is an immigration system that is selective. We want to be able to select people who are coming here that will ensure their success – criteria that will ensure their ability to assimilate successfully in our country. And random lotteries, extended family connections, that’s not the way to run our immigration system.”

Cissna noted that Monday’s bombing suspect "came in under the most extreme, remote possible family-based connection that you can have under current U.S. immigration law,” a sign that the country needs real immigration reform.

A reporter asked Cissna whether he thinks the NYC terrorist was radicalized while he was in the United States or when he was in Bangladesh where he immigrated from. Cissna replied that he had no idea.

Another reporter asked him for data to support his claim that the low eligibility criteria in extended family migration programs and diversity visa lotteries lend to a higher possibility that a migrant is susceptible to radicalization.

Cissna clarified that he believes the low eligibility criteria does not allow the U.S. to select “for the types of people that we want in this country according to criteria that will ensure that they will assimilate well.”

“But you seem to be saying that these kinds of immigrants are more likely to become terrorists,” the reporter pressed.

“Uh, no,” Cissna replied. “What I’m saying is that you have a system that doesn’t select at all or is barely selecting anybody, we don’t know what we’re going to get.”

Several reporters went on to try to catch Cissna saying something offensive about immigrants in general, one even going so far as to claim that immigrants commit less crime than native-born Americans and therefore Monday’s terror attack was just an "isolated incident."

The director of US Citizenship and Immigration Services says the New York bombing suspect "came in under the most extreme, remote possible family-based connection that you can have under current US immigration law" https://t.co/LU59fkSw4l