Media Ignoring a MAJOR Part of the Facebook Scandal 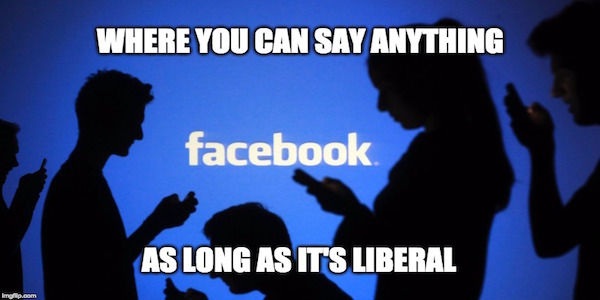 The liberal media are all over one part of the Facebook scandal story - and ignoring another. Generally, media have covered the accusations that the social media site is censoring conservative news and sources from their trending news feed. Coincidentally, this is also the part of the Facebook story affecting the media.

Potentially a bigger scandal (because it affects more people) is the accusation that Facebook censors individual member pages, blogs, smaller media outlets, and discussion groups reflecting a conservative point of view.  Sometimes, the sites are shut down, sometimes they are simply threatened into silence.

In 2013, a Facebook page for the conservative website "Chicks on The Right" was threatened with a shut-down after posting a message criticizing White House Press Secretary Jay Carney.  According to the site, the "offending" message of “Jay Carney can kiss my assular area” violated the site’s standards, so it blocked the "Chicks" site. Only because Fox News' Todd Starnes learned of and publicized the incident was  "Chicks on The Right" was saved from a permanent place in the Facebook penalty box.

Starnes' interest in Facebook censorship may stem from the time he was placed in the Facebook penitentiary. You may want to make sure there are no kids in the room before you go on because the Fox News host's "horrible" violation was a post mentioning four offensive subjects in the same paragraph. The proper nouns were: Paula Deen, Chick-fil-A, the NRA and Jesus Christ.

"I'm about as politically incorrect as you can get. I'm wearing an NRA ball cap, eating a Chick-fil-A sandwich, reading a Paula Deen cookbook and sipping a 20-ounce sweet tea while sitting in my Cracker Barrel rocking chair with the Gaither Vocal Band singing 'Jesus Saves' on the stereo and a Gideon's Bible in my pocket. Yes sir, I'm politically incorrect and happy as a June bug."

Mr. Starnes says he received a message from the Facebook police that said:

"We removed this from Facebook because it violates our Community Standards," Facebook wrote me. "So you're temporarily blocked from using this feature."

In March of 2015, 12-year-old "CJ" Pearson was sent to Facebook detention because he posted a video where he agreed with former NYC Mayor Giuliani's criticism of President Obama.

“Today I just want to applaud Mayor Rudy Giuliani for his comments about President Barack Obama,” Coreco “CJ” Pearson says in the video.

“President Obama, you don’t love America. If you really did love America, you would call ISIS what it really is: An assault on Christianity, an assault on America and a downright hate for the American values our country holds. Here in America, we don’t back down to terrorists. We fight them on their own battleground and we annihilate them to the very end.”

For posting this (offensive to liberals) video, Pearson found his account locked due to "suspicious activity."

American Conservatives are not the only ones facing Facebook censorship. This past December, a Canadian page critical of Liberal Prime Minister Justin Trudeau had a meme removed, seemingly, because it pointed out what it claimed was a double-standard in the Premier's policy.

After there was a pepper spray attack on a group of Syrians in Vancouver, Trudeau openly condemned the attack, lecturing us on what it means to be Canadian.

However, after another incident, in which two men – both named Mohamed, shot up a nightclub in Calgary, Trudeau was silent. No comment.

Not only was the meme removed, but they were warned never to post anything like it again or they will be sent to social media Siberia: 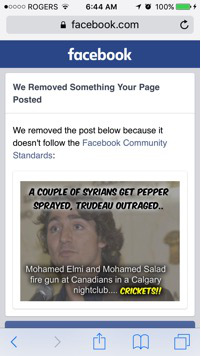 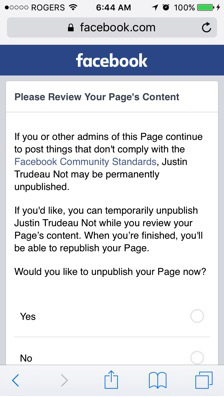 Patriotism may be another area offensive to the unknown Facebook constable. The website Liberty Unyielding claimed a picture of the Marine Corps emblem (picture below) with a black mourning ribbon was removed from a page and one of its administrators received a 3-day embargo:

Late Monday [7/27/15], Facebook unpublished the popular pro-military “Locked and Loaded” page, while telling administrators that a picture of the United States Marine Corps emblem with a ribbon marked “In Remembrance” violated their community standards. Jason Light, an administrator from Atlanta, told this reporter in an exclusive interview the page was covering the funeral and burial of Marine Lance Corporal Skip Wells, who was killed in Chattanooga.

In July of 2015, The Federalist reported that Facebook blocked individual posts that mentioned the Center for Medical Progress' revelations about Planned Parenthood's illegal trafficking of aborted baby parts:

Blogger Joe Newby, whose book about Facebook's liberal bias is scheduled to be published next fall, has been writing about the Facebook censoring of conservatives since 2013 at his site Conservative Firing Line. The censorship incidents he's reported include: 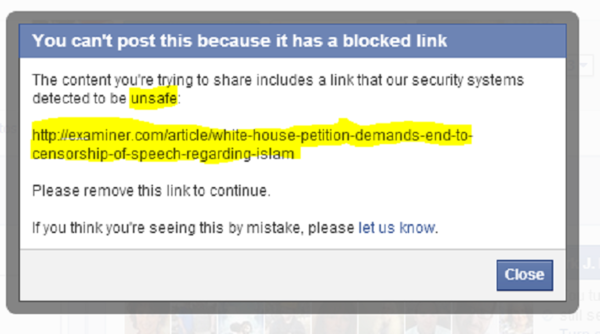 Fans of the North Carolina law which restricts people to using bathrooms labeled for their birth gender may not want to discuss it on Facebook. According to Cristi Merritt of Washington State, she was placed in Facebook PC Jail for seven days because she posted a video supporting the N.C. law.  Ms. Merritt told Stewart Varney of FBN, Facebook claimed there was nudity in the post, but there wasn't any (video at the bottom of the post).

“They actually sent me some notifications saying there was some nudity in my photos.  They sent me about 9 photos and told me I needed to remove the nudity, but some of those photos were pictures of cubs and me at the Republican Convention and things like that, so no nudity.”

Part of the issue is that Facebook doesn't post specific rules. For example, this reporter has been sent outside the Facebook fence six or seven times. According to Facebook, it was due to my posting in too many conservative discussion groups too quickly. To be truthful, they might be correct. However, when I inquired about the rule (how many groups could be posted to in what time period) so I could avoid banishment the answer, the response I received was that Facebook policy doesn't allow them to share that information.

Based on the examination of the incidents above, as well as others, there seems to be little consistency of what content is considered not Kosher and what penalty is distributed as result. From this, it seems reasonable to infer that, when there's a complaint about a particular post or site, the ensuing investigation and ruling is entirely subjective to the particular employee making the ruling.

If the social media site wants to avoid incidents such as those described above (or the hundreds of others that could have been included) and the ensuing criticism, Facebook should develop and publish specific rules about what is good vs. what is bad. Instead of informing a page that a picture or post "violated community rules," the site would be well-served if it posted, for all to see, what exactly violates those rules and what specific punishment is doled out for each violation. For example: "We do not allow pictures of the first family in Che shirts, so your site goes into the pokey and you are banned for a week."

This would serve three important purposes.

Facebook is no longer the tiny website invented by a Harvard student, Mark Zuckerberg, and three of his classmates, it now has over 1.6 billion active users, and almost 13,000 full-time employees. It's time for the now-giant company to stop acting like a tiny company when evaluating member content.

It's also time for the liberal media to drop their narcissistic stance and report the entire story of Facebook censorship, not just the part affecting them.

Embedded below is the Stuart Varney interview of Cristi Merritt: